A 2News investigation uncovered the frightening reality when it comes to the number of parolees Utah Adult Probation and Parole has failed to properly supervise — some of whom are now fugitives putting the public in extreme danger.

For the past six months, on average, AP&P lost track of and could not account for 328 parolees statewide each month, documents from the Utah Department of Corrections confirm. The whereabouts of killers, sex offenders, violent gang members from every street gang, and some of the worst of the worst remain unknown.

Our efforts to report on this have been met with resistance from parole officials, including the denial of requested records and the ability to interview parole agents. In fact, DOC arranged interviews with three parole agents back in February, but canceled within less than 24 hours. Current parole agents have risked their jobs to speak out about the problem. All paint a troubling picture — backed up by DOC’s own data —showing a 72% increase in absconders since 2015. Innocent people are becoming victims, with some losing their lives as a result.

On June 21, 2020, Jahir Gomez, 17, was with his 16-year old friend, headed to a drive-thru to get something to eat. At approximately 4:10 a.m., the driver of a GMC Sierra truck ran a red light at the intersection of Redwood Road and North Temple St. in Salt Lake County and hit the passenger side of the Nissan Sentra head-on.

Salt Lake Police body camera footage and crime scene photos released to 2News Investigates shows it was a horrific crash. Gomez’s friend told police the truck must have been traveling 100 mph when it hit with his car. Gomez was trapped inside, and first responders were forced to use the jaws of life to free him. While still conscious, the teen suffered very serious injuries and was rushed to a hospital in Murray. Gomez suffered a brain hemorrhage, four broken ribs, a broken pelvis, a destroyed spleen that had to be surgically removed, a damaged liver, a collapsed lung and a concussive blow to the heart. While his friend walked away with a scratch, Gomez was in the fight of his young life.

“…our thoughts were, as soon as we got to the hospital we can sign him off and take him home,” said Fernando Lopez, Gomez’s uncle.

That wouldn’t be the case. The family were told Gomez was awake when he arrived at the hospital, but he soon feel into a coma, Lopez said.

Gomez was born in Salt Lake City and was characterized as a very shy and timid boy. Bull riding was a huge passion of his, and he wanted to be the best bull rider in the world. Although an ambitious goal, his uncle says, videos of Gomez at various rodeos in Spanish Fork show he was extremely talented and affectionately nicknamed “La Pulga,” which in Spanish means “The Flea.” While small in stature, his uncle says he looked like a flea jumping up and down on a bull. Bull riding was lucrative, and he did very well competing. Lopez says his nephew’s goal was to live life right. He loved his little sister and older brother and father, who lives in Mexico. His mother died in 2011. Lopez said his nephew loved farm animals and was still trying to figure out what he wanted to do for a career.

“Monday morning at 9 a.m., they called me and said that his heart stopped and that we need to rush over there,” Lopez said. “They were able to give him CPR, revive him, and shortly after we arrived they told us that because of the fact that his heart stopped, he stopped receiving oxygen to his brain and then subsequently was brain dead.”

Gomez’s family hoped he would miraculously pull through, even though he was hooked up to a ventilator, on life support. But eight days later, Lopez had to make the decision no one wants to make. He says all of his family members were hysterical and asked him to make the final call.

The doctors told me that it would be cruel if his heart stopped again to perform CPR, and so I had to make the decision to take him off life support,” said Lopez.

It was a decision he still has not come to terms with. Gomez, with his whole life ahead of him, was pronounced dead on June 29, 2020.

“THE MAN THAT TOOK AWAY HIS DREAMS”

It took Salt Lake City Police two months to figure out who was behind the wheel of that GMC Sierra. Whoever it was had been driving 90 mph on a stretch of road where the speed limit is 35 mph.

What they found in the truck confirmed it was a sophisticated drug dealer. The inventory included:

A driver’s license and fingerprints on the stolen gun matched a man named Llobani Figueroa. The license itself was either suspended or revoked at the time of the crash, according to charging documents in the case. Witnesses positively identified him from a photo lineup. Handwriting analysis indicated at least some of what was found in the drug ledger had been written by him.

But Figueroa, a parole fugitive, had already run from the crash scene and vanished into the darkness, as bystanders who saw the crash pleaded with him to stay.

2News Investigates obtained a spreadsheet DOC communications director Kaitlin Felsted compiled from a database called “Offender Track,” which lists probationers and parolees who have absconded and are considered to be in “fugitive” status. However, DOC left one name off the list: Figueroa, a high-level drug trafficker linked to an international criminal syndicate.

It is not clear whether that name was intentionally left off the list or if it was inadvertent — Felsted did not respond to that question — but his case illustrates the danger all Utahns face as a result of the failure to properly supervise parolees.

Gomez’s family didn’t know about the missteps involving Figueroa’s supervision until we told them. Now, they want answers, accountability and justice for Gomez’s death — something that is not achievable, because Figueroa is still nowhere to be found.

“I’m sure he had enough in that duffle bag to put him away for the rest of his life. Mr. Figueroa’s victim, you know, he’s a 17-year old boy. He did not deserve that,” says our AP&P whistleblower.

“I don’t want my name out there as that guy who let someone get killed or get victimized,” one whistleblower says.

Frustrated parole agents have risked their jobs to tell 2News what’s really going on inside AP&P. Former agents claim they lost their police powers and were turned into social workers by supervisors who, more often than not, required them to give the parolee another chance instead of writing a warrant and sending it to the Board of Pardons and Parole in an effort to send them back to prison.

A video presentation used to train AP&P agents corroborates what the whistleblowers say. During a 2019 training seminar, presenter Dennis Franklin seems to imply exactly what the agents we spoke to complained about — AP&P wants agents to be more like social workers, as opposed to law enforcement.

“We are in the process of pushing a very deep, philosophical shift case action plans with a focal point of case management,” Franklin said. “Our probation and parole officers — not only do we send to the corrections academy, we put ’em through the police academy. They have full police powers to arrest to do whatever needs to be done. They wear both hats, and so our focal point for a lot has been arresting people, holding them accountable for a lot of years. And the last probably half dozen years we tried to make that shift — now we’re really focusing in on that shift — is that the case action plan is the focal point, not the law enforcement powers. We still need those. We are absolutely gonna have them, but our focus is on case management, on working with our offenders to address their criminal behaviors.”

Many feel this philosophical shift has handcuffed agents. They say AP&P is a mess, things are out of control, and they’ve lost confidence in leadership.

I’m absolutely worried about the public’s safety, and law enforcement especially, because the law enforcement officers on the street are the ones who come in contact with these guys, it isn’t AP&P. When was the last time an AP & P agent got shot?” one source told 2News. “You know, it just doesn’t happen. These guys are unpredictable, and look how easy they can get their hands on a gun. It’s not working, and that’s what I would tell the public. You should be very concerned. Don’t leave your doors unlocked on your car. Don’t leave your doors unlocked on your house, because if your car gets stolen it’s probably a probationer or a parolee who’s behind it.”

Tue May 4 , 2021
The process to become a clerk to a Supreme Court justice varies by chamber, but the reward for those who make it there is enormous. The standard hiring bonus for an associate coming from the Supreme Court is now $400,000 at the top law firms (plus the $190,000 annual salary). […] 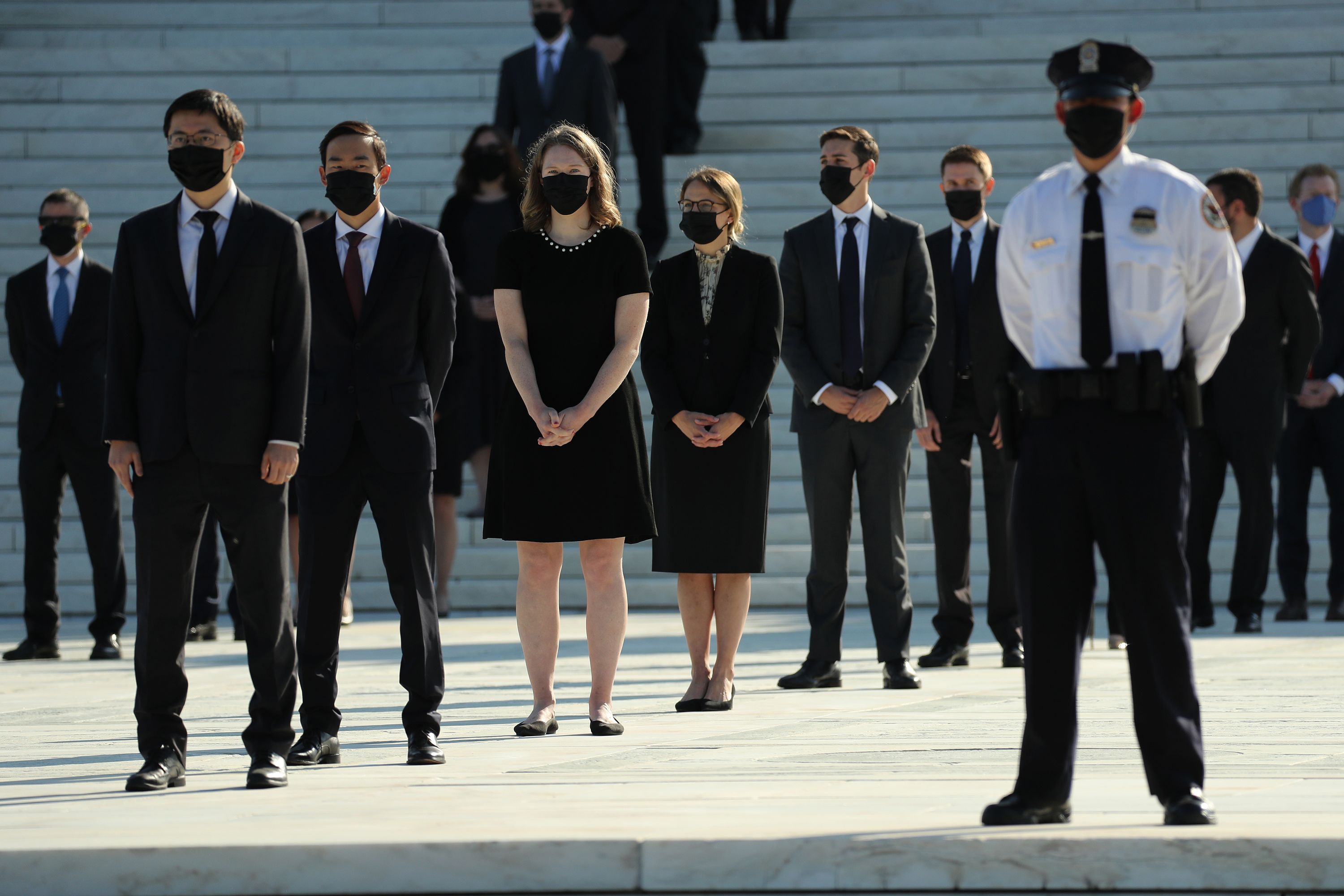