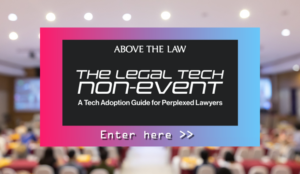 Ed. note: This is the fourth installment of The Legal Tech-to-English Dictionary, part of our Non-Event for Tech-Perplexed Lawyers. Jared Correia is the host of the Non-Eventcast.

There’s a term for when attorneys use Latin and other arcane languages to describe legal processes to consumers: “legalese.”

But there’s no similar term for when vendors use technical and other arcane languages to describe their legal software operations to lawyers.

True, this dynamic may seem unfair. But now we have The Legal Tech-to-English Dictionary to help us cope.

Read on for the fourth installment, where we translate contract lifecycle management topics to plain English.

And for more commentary on legal tech, check out the Non-Eventcast in the Law Practice Management Software and Legal Operations Contract Lifecycle Management rooms at the Above the Law Non-Event.

1. A comprehensive method for managing contracts in a business or law firm setting via an identified workflow, from initiation to signature and renewal.
2. The use of software to establish and process through all phases of legal contract management.

Lawyer 1: Can you locate the Vandelay Industries supplier contract?

Lawyer 2: Well, you know what I always say: ‘I have an amazing filing system. But, my retrieval system sucks!’

Cf. “Ratatouille,” when Remy finds the letter indicating that Linguini is really Gusteau’s son, just in the nick of time — the way it happens in every movie. That ain’t real life. And, if you’re not managing each phase of a contract as it passes through your law firm, don’t expect a Hollywood miracle to save you.

1. One of the first steps in the process of contract lifecycle management, when the legal team is asked to draft a contract.
2. The contract drafting process, including review and negotiation.

Lawyer 1: The sales team is asking for another contract.

Lawyer 2: At least they’re not Googling shit and trying to go rogue.

Cf. William Shakespeare … or, perhaps not.

1. The record of the changes made to a file or document.
2. The system that captures granular transactions in a specific process, like contract lifecycle management.

Lawyer 1: We’re about to be audited by corporate!

Lawyer 1: I’m gonna empty my bank account. Can you meet me in Botswana in 36 hours?

Lawyer 2: Relax, we’ve got audit trails available for everything we’ve drafted and managed in our contract lifecycle management software.

Lawyer 1: Did I say Botswana? I meant Bertucci’s. For lunch.

Cf. Because you can only explain away so many mistakes, before ultimately tripping on your rug and being hospitalized with a serious neck injury.

1. A contract clause that releases a party from its contractual obligations due to an unforeseen event beyond their control.
2. An act of God.
3. Like, every single thing that happened over the past 16+ months … or, perhaps not.

Contractor 1: So, I’m here to collect my fee for installing those wheels on the pharaoh’s chariot last week?

Lawyer 1: (Wipes locust from his forehead) Are you kidding me?

1. An agreement made between a number of stakeholders.
2. Does this involve blockchain somehow?

Lawyer 2: Just go with it. He’s gonna be a party to this deal now.

Cf. Multiparty agreements that require numerous signatories can be managed by a contract lifecycle management tool that can track actions across parties, including for revisions and signature.

This is the fourth installment of The Legal Tech-to-English Dictionary, part of our Non-Event for Tech-Perplexed Lawyers.

Jared Correia, a consultant and legal technology expert, is the host of the Non-Eventcast, the featured podcast of the Above the Law Non-Event for Tech-Perplexed Lawyers.

Wed Jun 16 , 2021
Exeter boss Rob Baxter warns of player rebellion over ‘frightening inconsistency’ punishments after Chiefs forwards Dave Ewers and Sam Skinner are banned for dangerous tackles and ruled out of Premiership play-offs Baxter has criticised how dangerous tackles are being interpreted It came after Exeter duo Skinner and Ewers were handed […] 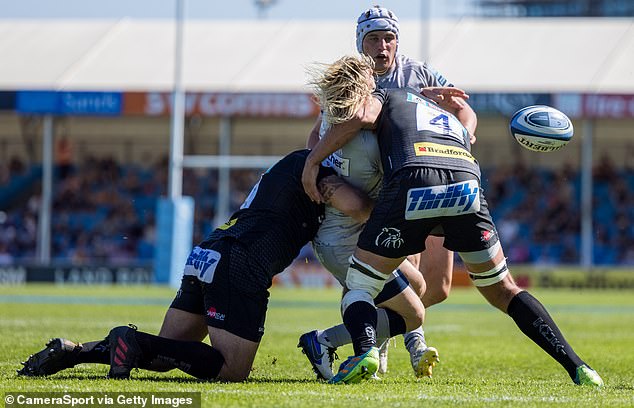