A South Carolina law firm accused of assisting in a multimillion dollar financial scheme that preyed on retirees and military veterans is out of time and money.

The Upstate Law Group and the firm’s former partners, Candy Kern-Fuller and Howard Sutter, were ordered by a federal judge to pay $725,000 for their role in a nationwide scheme that profited off of the sale of military pensions and disability benefits.

The court order, issued this week, is the result of a federal lawsuit brought against the law firm by the S.C. Department of Consumer Affairs, the Arkansas Attorney General’s Office and the federal Consumer Financial Protection Bureau.

The $725,000 the law firm is required to pay is a small amount of money compared with the funds the firm allegedly helped to collect from investors and military veterans throughout the country. But state and federal financial regulators determined that was all Sutter, Kern-Fuller and the Upstate Law Group were capable of paying.

Some of the people who were roped into the financial scheme are still missing hundreds of thousands of dollars that they forwarded to bank accounts controlled by the Upstate Law Group, which previously operated out of an office in Pickens County.

The Consumer Financial Protection Bureau has allocated funds to try to make some of those people whole, however, according to the S.C. Department of Consumer Affairs.

Kern-Fuller and her attorneys, who are also representing the law firm, did not respond to emails seeking comment. Andrew Mathias, Sutter’s attorney, declined to comment on the federal court judgment.

The S.C. Department of Consumer Affairs said the agency was “pleased” with the outcome of the case.

The Post and Courier published an investigation about the Upstate Law Group and Kern-Fuller in late 2019 as evidence began to emerge about the firm’s involvement in the alleged scheme, which was carried out over at least seven years.

We’re starting a weekly newsletter about the business stories that are shaping Charleston and South Carolina. Get ahead with us – it’s free.

This is how the scheme worked, according to various court records: Several companies that partnered with the Upstate Law Group convinced cash-strapped military veterans to sign over the rights to their pension or disability payments for several years. The companies then recruited retirees to invest in those federal benefit payments.

Part of the investors’ money provided a one-time, lump sum payment to the veterans. And in return, the investors expected to earn back their cash, with interest, by receiving the veterans’ monthly benefit payments over several years.

The Upstate Law Group and its business partners — several which have also been cited by state and federal authorities — made their money on the front end, collecting thousands of dollars in fees from each deal.

The Upstate Law Group effectively served as the banker, legal counsel and debt collector for the entire operation, according to documents reviewed by The Post and Courier.

The law firm ensured each contract between the veterans and investors was filled out correctly. The firm used its bank accounts to manage the millions of dollars that changed hands. If a veteran stopped forwarding their monthly benefit payments, Kern-Fuller sued them in Greenville County court seeking hefty damages for backing out of the contracts.

As part of the federal court judgment this week, Sutter, Kern-Fuller and the Upstate Law Group were not required to admit any guilt. But they are banned from brokering similar deals in the future or trying to collect money on the deals they allegedly helped to orchestrate in past years.

It’s unclear what happens to the law firm from here.

The Upstate Law Group, which Sutter has since left, is clearly under immense financial pressure. Last year, it was also ordered to pay nearly $3 million in restitution and fines for allegedly helping orchestrate the same military benefit contracts in Arizona.

The law firm has since appealed that ruling.

Fri Jan 22 , 2021
It’s part of the dance at the Minnesota Legislature (and most legislatures): The opening weeks are devoted to introductions of new members, primers on state agencies and programs, and the unveiling of legislative agendas. To that end, the Senate GOP caucus released its legislative plan Thursday. It includes bills that […] 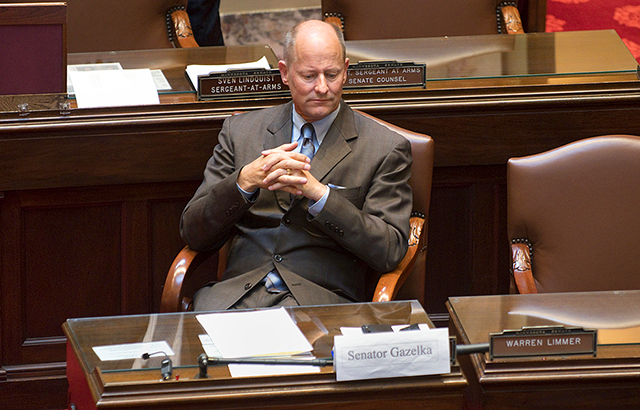