Conventional wisdom among Philip A. Contant and his four siblings growing up in the 1950s was that they were being brainwashed by their parents to believe nothing could be better than living in Springfield.

So it was that Phil Contant graduated from Classical High School, returned to his hometown after graduation from Suffolk Law School to open his law practice, married wife Liz and bought a home in the Forest Park neighborhood. It’s where they raised four children and still live happily in semi-retirement.

Along the way, there were three terms as a city councilor for the man who served as presiding judge of the Westfield District Court for more than 30 years, as well as other active involvement in helping make Springfield remain a great place to live, work and play.

The Contants and some of their children and grandchildren today pitch in to volunteer with Concerned Citizens for Springfield to help bring new residents to their beloved City of Homes. Liz Contant recently became a board member for the nonprofit, her husband says, and together the family has done everything from stripping wallpaper to raking leaves on properties the organization has rescued over the past 25 years.

“I’m getting a kick out of saying the people in their 80s decided they needed to get some young blood in the organization so they’re getting people in their 70s to step up,” Phil Contant jokes this week.

Seriously, he adds, “It’s a great organization that has done a lot of things in this neighborhood and around the city. They’ve really helped keep the Forest Park Historical District intact and looking good. It gives a boost to the neighborhoods, and everyone involved in the organization feels good about the work they do.”

The Contants were among neighbors to a house several years ago that had become an eyesore; it was a rental property which was being abused and which the bank foreclosed upon, he says.

“Concerned Citizens worked with us. All the neighbors pitched in money to salvage the house and gave sweat equity to work on it,” the judge says. “It wound up being sold to a nice family who’ve lived here for 10 years.”

Ultimately, the neighbors recouped the funds they put up to help Concerned Citizens buy the property. “There was no guarantee we would,” Contant says. “The project turned out to be a nice community-building thing for our neighborhood. There was a lot of satisfying work.”

“As a former city councilor and in my other roles, I’ve always felt devoted to the city,” says Contant. “We want all the neighborhoods to be healthy. One of the things is that if one house starts being an eyesore and the rest of houses are in decent shape, there needs to be a way to keep that from spreading. Concerned Citizens helps with that.”

“My interest in the city has always been strong,” Contant adds. “We joke in our family that we were all brainwashed by our parents to be Springfield supporters. They were loyal Springfield people, and they passed it down to us.”

He and his siblings all attended Springfield Public Schools. Their mother, the late Katherine M. Contant, was a teacher, including a stint at White Street Elementary School, which she herself had attended as a child, her son notes.

His own four children are all graduates of Springfield Central High School. “They had very good experiences at Central,” Contant says. “All of them have been pretty successful, and I think we all have an engrained loyalty to this city. It’s always driven me.”

An added family connection to Springfield’s past that may play a role in his fondness for the work Concerned Citizens does, the judge notes, is that his maternal grandfather, John Toole, once built homes in the city back in the early days of the 20th century.

While Contant reached the mandatory retirement age of 70 for judges in Massachusetts in May 2018, he’s rarely left the bench, even during COVID, serving three or four days of each week as a recall judge, primarily in Springfield District Court.

There were times during the past year of the pandemic, he says, while he was working remotely from home alongside three of his Springfield grandchildren learning remotely.

As Contant reflects on his own neighborhood and Springfield at large, he says, “There’s lots of people who are loyal to the city. They could probably afford to live in suburbia, but they want to be part of Springfield.”

He adds, “I think the city of Springfield has a lot to offer. We’re not afraid to live here, and we all get very defensive when we hear badmouthing about Springfield. Most all of our neighborhoods are very nice.”

The sometimes rampant comments by outliers who suggest Springfield is a crime-ridden, down-and-out city beset by problems including failing schools “drive me and (my wife) nuts,” the judge says.

“It’s simply not the case,” Contant says. “Our children never had problems in the Springfield Public Schools. They’ve always done well…Our kids, I feel, are open and well rounded. Our own neighborhood is more diverse than it’s ever been and is filled with very nice people who are a pleasure to have for neighbors. I just think it’s important to keep that going for all of Springfield.”

Cynthia G. Simison is executive editor of The Republican; she may be reached by email to [email protected]

Sun May 16 , 2021
Zimbabwean Minister of Justice Ziyambi Ziyambi signs the oath of office during the swearing in ceremony at State House in Harare, Zimbabwe, on December 4, 2017. REUTERS/Philimon Bulawayo Zimbabwe’s justice minister accused the country’s judiciary of being “captured” by foreign forces seeking to destabilise the government after the High Court […] 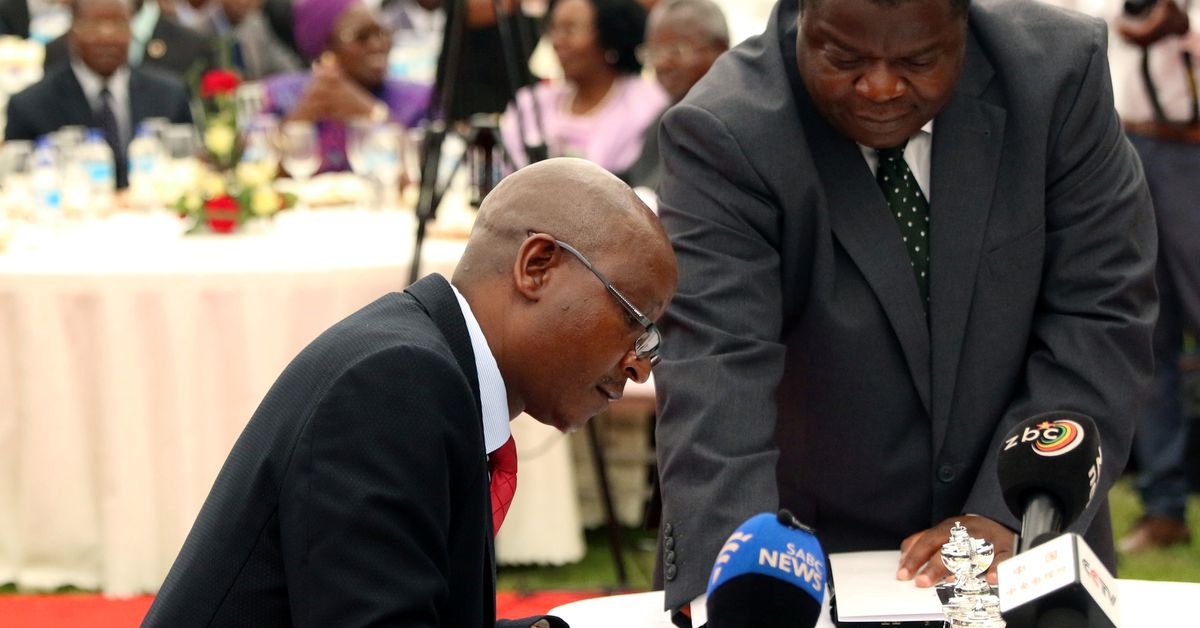