The original complaint, filed by self-described political activist and local government watchdog Kristopher Bilbrey, was that the commissioners “took action outside of meeting” when discussing their annual attorney contract.

According to the Public Access office, County Commissioner Ed Tarantino argued that his phone calls at the time with fellow Commissioner Steve Dellinger should be considered a “caucus,” which does not fall under the Indiana Open Door Law.

Tarantino explained in his response to the complaint that “a ‘caucus’ is defined as ‘a gathering of members of a political party or coalition which is held for purposes of planning political strategy and holding discussions designed to prepare the members for taking official action.”

Tarantino argued that because he and Dellinger are both Republicans and were both elected after campaigning against the development of commercial wind energy projects in Henry County, their discussion qualified as a caucus.

He also asserted that the discussions about the county attorney contract fell under the category of “administrative functions,” which do not require prior public notice.

“Since they were both Democrats, the two commissioners relied on the ODL caucus exception to justify their actions as lawful based on their political party affiliation,” Britt said. “The trial court ruled that the caucus exception applied to the commissioners’ gatherings, the Indiana Court of Appeals reversed the trial court’s conclusion as clearly erroneous, and the Indiana Supreme Court adopted that holding.”

Britt said a caucus is about a political party’s business, not the business of the public. At the same time, he noted that public meetings are not the right forum for members of the same political party to have internal discussions of the party’s strategy, methodology, or ideology in terms of its platform or strategy.

“The meeting to discuss the non-renewal of an attorney’s contract is not inherently political in nature and is overwhelmingly the public’s business. The discussions and action should have taken place in a public meeting,” Britt said. “Henry County is not alone in this argument. Even so, it is time to retire the notion that governing bodies themselves can simply call a caucus to discuss matters with their like-minded colleagues to subvert the Open Door Law.

“Official political party proceedings notwithstanding, caucuses are generally not appropriate within a government unit,” he said.

Britt also addressed the argument that Tarantino’s call to Dellinger may have been an administrative function meeting, which does not require 48-hours-notice under the open door law.

“ ‘Administrative functions’ means only routine activities that are reasonably related to the everyday internal management of the county or town, including conferring with, receiving information from, and making recommendations to staff members and other county or town officials or employees,” Britt said.

He said “administrative functions” do not include: taking final action on public business; the exercise of legislative powers; or awarding of or entering into contracts, or any other action creating an obligation or otherwise binding the county or town.

Britt said it stands to reason that if state law prohibits the entering into contracts outside of public meetings, then the inverse must be true as well: the non-renewal of contracts is public business.

“Indiana Code section 36-2-2-30 authorizes a county executive to employ an attorney, but does not give the ability to do so outside of a public meeting,” Britt said. “While a lone commissioner putting out feelers to potential prospects is not subject to meeting requirements, the decision not to renew a contract and replace an attorney should play out in public.”

Commissioner Tarantino said he was not trying to violate the state law when working on the attorney contract.

“I apologize for violating the Open Door policy,” Tarantino said. “I understand ignorance of the law is no excuse … The intent was not to hide anything.”

Tarantino said he was under a very stringent timeline to inform the former county commissioner attorney, Joel Harvey, that the commissioners were not going to renew Harvey’s contract for 2021. The contract would have automatically renewed Jan. 1 unless the commissioners took action 30 days before then; Tarantino informed Harvey of the non-renewal decision Nov. 30.

“There was no possible way to give the public 48 hours notice and call a public meeting,” Tarantino said.

The Henry County Commissioners voted 2-1 at their Dec. 16 public meeting to approve the non-renewal decision. Then-commissioner Ed Yanos voted against the decision.

Tarantino said he, Dellinger and Commissioner Bobbi Plummer are trying not to violate the Open Door policy going forward. He pointed out that 2021 is first time in many years that all three Henry County Commissioners are working in the county office eight hours a day.

Wed Feb 10 , 2021
“Mr. Ponton, I believe you have a filter turned on in the video settings,” the judge said. The small, white kitten looked sad with its concerned eyes darting back and forth. The kitten opened its mouth to speak. “Can you hear me judge?” Ponton said, appearing in the cat filter. […] 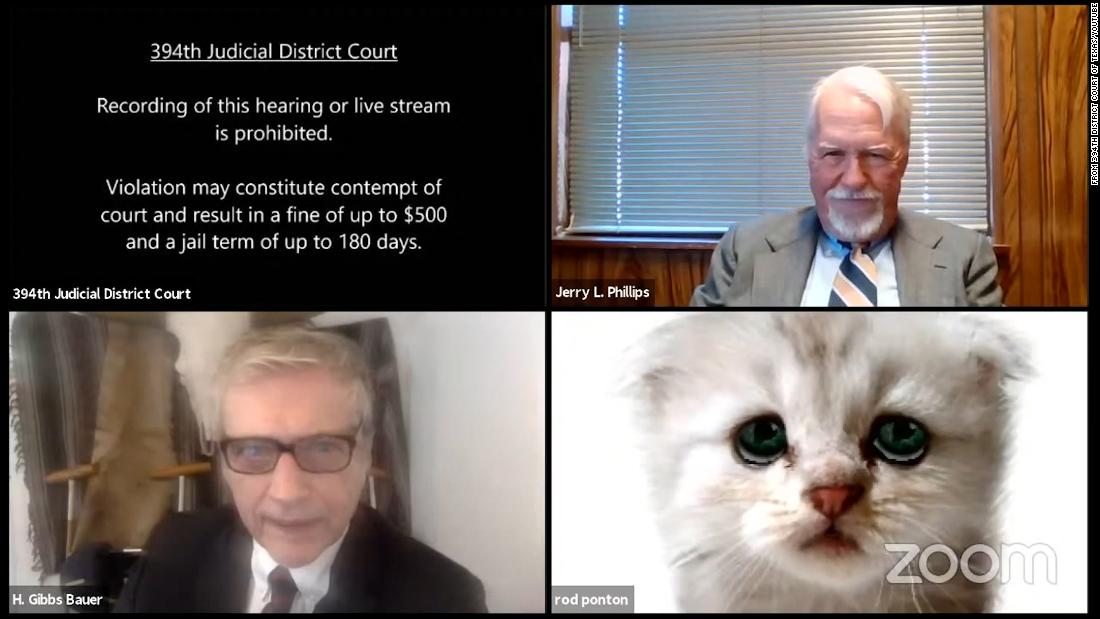