The federal appeals court in Washington is a frequent steppingstone to a Supreme Court nomination. So any choice for the U.S. Court of Appeals for the D.C. Circuit matters. Given President Biden’s pledge to name the first Black woman to the Supreme Court, though, Jackson’s elevation would be particularly significant. A graduate of Harvard University and Harvard Law School, she once clerked for Justice Stephen G. Breyer.

One of the high court’s three remaining liberals, Breyer, at 82, may well retire in the next year, and, while it’s hard to phrase this politely, he should: The tragic choice made by the late Justice Ruth Bader Ginsburg not to retire during President Barack Obama’s term ought to weigh heavily on Breyer.

Hence the potential significance of Jackson’s elevation to Garland’s seat. To put it bluntly, at least based on the traditional model of choosing justices from among those who have judicial experience, there aren’t very many Black women on the list. There are, astonishingly, just four Black women serving as active judges on the federal appeals courts, and all are over 65.

Another leading possibility is California Supreme Court justice Leondra Kruger, a Yale Law School graduate who edited the Yale Law Journal, clerked for Justice John Paul Stevens and served as principal deputy solicitor general during the Obama administration. And, of course, Biden could look outside the bench, to practicing lawyers or government officials.

Still, Jackson, named to the district court by Obama in 2013, brings to the bench an intriguing — and for the Democratic Party’s restless progressives, attractive — piece of career diversity as well: experience as a public defender.

No current Supreme Court justice has the perspective of having been a public defender, representing indigent defendants, although several — Justices Samuel A. Alito Jr., Sonia Sotomayor and Brett M. Kavanaugh, in his role as associate independent counsel — have prosecutorial experience.

For Jackson, the daughter of two public school teachers (her father later became a lawyer), the criminal justice system has an unusually personal wrinkle as well: Her uncle was convicted of a low-level drug crime when she was a senior in high school, and was sentenced to life in prison under a draconian three-strikes law. (He had been convicted previously of two minor offenses.) He ended up receiving clemency from Obama after serving three decades.

She also brings the real-world perspective of a working mother. In a remarkably candid speech at the University of Georgia in 2017, Jackson described the challenges she encountered juggling private practice at a major law firm, marriage to a surgeon and motherhood to two young daughters.

“I think it is not possible to overstate the degree of difficulty that many young women, and especially new mothers, face in the law firm context,” she observed. “The hours are long; the workflow is unpredictable; you have little control over your time and schedule; and you start to feel as though the demands of the billable hour are constantly in conflict with the needs of your children and your family responsibilities.” How refreshing to hear from a self-confessed non-Superwoman.

Jackson’s most prominent ruling since taking the bench involved the House Judiciary Committee’s 2019 effort to subpoena former White House counsel Donald McGahn; in a 118-page opinion, Jackson rejected the Trump administration’s argument that McGahn was absolutely immune from being called to testify.

“Stated simply,” she wrote, “the primary takeaway from the past 250 years of recorded American history is that Presidents are not kings.” (Disclosure: Jackson is presiding over a defamation suit filed against The Post by the Trump campaign.)

But a more obscure ruling, involving William Pierce, a deaf D.C. man who was imprisoned for 51 days after a domestic dispute, may offer more insight into Jackson’s belief in law as a mechanism for achieving justice. Corrections officials did nothing to accommodate Pierce’s disability, as the law requires, ignoring his repeated requests for a sign-language interpreter.

Jackson assailed prison officials’ “willful blindness regarding Pierce’s need for accommodation.” She said it was “astonishing” for D.C. to claim that it had done enough, when “prison employees took no steps whatsoever” to figure out how to help him. And she took the unusual step of ruling for Pierce even before trial.

You can learn a lot about a judge by the way she handles the biggest-profile cases, involving those at the highest levels of government. But perhaps the more revealing test is how she applies the law to help those with the least power and the greatest need for justice.

How DJI and Draganfly tried to use the pandemic to get law enforcement to use more drones.

Sat Feb 6 , 2021
In April, as COVID-19 cases exploded across the U.S. and local officials scrambled for solutions, a police department in Connecticut tried a new way to monitor the spread of the virus. One morning, as masked shoppers lined up 6 feet apart outside Trader Joe’s in Westport, the police department flew […] 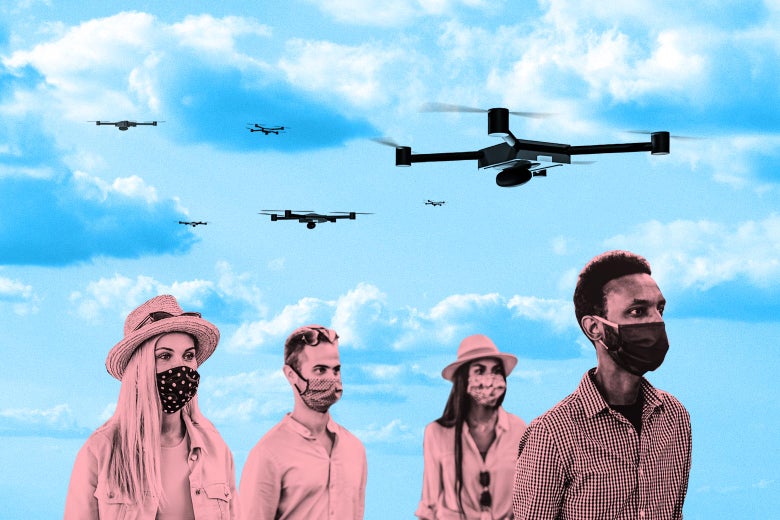