Since our last advisory on Name, Image, and Likeness (NIL) laws was published, there have been a number of newly passed and proposed state and federal laws we would like to highlight.

In January 2021, Michigan Governor Gretchen Whitmer signed House Bill No. 5217, which will allow students to begin to monetize their NIL rights. Michigan’s law shares a number of similarities to 6 other state NIL laws that have been passed. [1] in that it: (1) provides rules for student-athlete disclosure requirements, (2) provides agent licensing requirements, and (3) prevents a student-athletes’ grant-in aid or stipend scholarship to be reduced or revoked for earning NIL-based compensation.  A noteworthy distinction is that, although this law does prohibit a student-athlete from entering into a contract that is in conflict with their team’s contract, it is limited to NIL contracts that require a student to display a sponsor’s apparel or otherwise advertise for the sponsor. This is a more explicit and narrow construction than the other state NIL laws. Michigan’s law is set to take effect on December 31, 2022.

On March 26, 2021, Arizona’s Governor Doug Ducey signed Arizona Senate Bill 1296 into law. In line with Michigan and the other states that have passed NIL legislation, Arizona (1) prohibits student-athletes from entering into contracts that conflict with their team’s contract(s), (2) includes agent licensing requirements, and (3) protects student-athletes from being denied a scholarship or eligibility for their sport if they receive NIL-based compensation. Some of what makes Arizona’s law different is that it also prevents student-athletes from entering into contracts that conflict with another individual’s, or their institution’s, intellectual property rights. There is also no provision requiring student-athletes to disclose endorsement contracts. Pursuant to Arizona’s law-making process, unless otherwise indicated by the bill, all laws go into effect 90 days after the State Legislature adjourns. Applying that formula to the April 24, 2021 adjournment of the Arizona State Legislature, Senate Bill 1296 is set to take effect on July 23, 2021.

Transitioning to the federal level, in the 117th Congress, the College Athlete Economic Freedom Act was introduced on February 4, 2021.[2] This bill provides student-athletes with the right to be represented by an agent and prohibits colleges, universities, and athletic associations from preventing or regulating student-athlete’s agent relations. The receipt of NIL compensation does not adversely affect the eligibility of a student-athlete. Interestingly, the College Athlete Economic Freedom Act does not have an explicit prohibition on student-athletes entering into contracts that interfere with team contracts, nor does it have explicit disclosure requirements. What separates this bill from others is that it prohibits colleges and universities from preventing student-athletes from forming a collective representative to facilitate group licensing agreements. This is significant as it potentially gives rise to a host of labor and intellectual property-related issues/considerations athletic departments will want to be aware of and engage in. In addition, the bill addresses discrimination related concerns by mandating that institutions and/or parties affiliated with institutions that provide NIL-related support to student-athletes make such support accessible to all college athletes regardless of race, gender, or sport.

An additional federal bill is the Amateur Athletes Protection and Compensation Act of 2021.[3] Also consistent with several state NIL laws, the bill requires disclosure within 7 days following the student-athlete entering into an endorsement contract. This requirement also applies to student-athletes being recruited – before signing a letter of intent, they must disclose endorsement contracts by providing a copy of the contract to the institution. The bill prohibits institutions from punishing or prohibiting student-athletes for getting representation from an agent and places limitations on penalties related to transfers. A student-athlete will not lose eligibility if they provide notice of intent to transfer at least 7 days prior to transferring and do not do so within 60 days of the start of their athletic season or during the season itself.

There are several highlights of this bill warranting close attention from athletic departments, compliance officers, and other college administrators. Chiefly, these areas are (1) the formation of the Amateur Intercollegiate Athletic Corporation (AIAC), (2) the allowance of college athletes who declare for a professional sports draft to return to college sports, and (3) required legally-binding disclosures that colleges and universities must make to athletes before they commit to enroll at the institution. The AIAC is an independent corporation, comprised at least in part of current or former student-athletes, charged with providing guidance for best practices in relation to agency and endorsement contracts.  One particular purpose they serve is to provide student-athletes with a process for swift resolution of contract conflicts by providing a neutral arbitrator to resolve complaints. Second, the bill allows for student-athletes who declare for a professional sports draft to return to college sports if they: (1) do not receive compensation from a professional league, professional team, sports agent, athlete representative, or entity associated with professional sports and (2) declare their intent to resume competing in college sports within 7 days of the draft’s conclusion. Third, before an athlete commits to enroll at a particular institution, the institution is required to make the following disclosures to the student-athlete: (1) the amount and duration of grant-in aid the institution will provide to assist the athlete for each academic year they are eligible and also after their eligibility expires, (2) the percentage of medical coverage that is required during the athlete’s eligibility and the amount of out-of-pocket expenses the institution will pay during and after the athlete’s period of eligibility, and (3) whether the institution will pay disability insurance.

The landscape of NIL legislation is quickly and constantly evolving, with Florida’s NIL law set to go into effect in July 2021. Massachusetts, Pennsylvania, and West Virginia could all very well have enacted NIL legislation this calendar year given that, if passed, the law would take effect very soon thereafter. It is also worth noting that 9 states  – Alabama, Arkansas, Georgia, Iowa, Kansas, Louisiana, Mississippi, New Mexico, and Oregon – have proposed NIL legislation during February or March 2021 and each bill has an effective date of either July 1, 2021 or January 1, 2022.

[3] This bill was introduced by and is being sponsored by Senator Jerry Moran (R-KS) on February 4, 2021.

Thu Apr 15 , 2021
Progressive activists Thursday rallied around new court-packing legislation and pledged to do the grassroots work to convince the Democratic-led Congress to pass the legislation to create a 13-member Supreme Court.  Sean Eldridge, founder and president of Stand Up America, said his organization will be educating millions of members about the importance […] 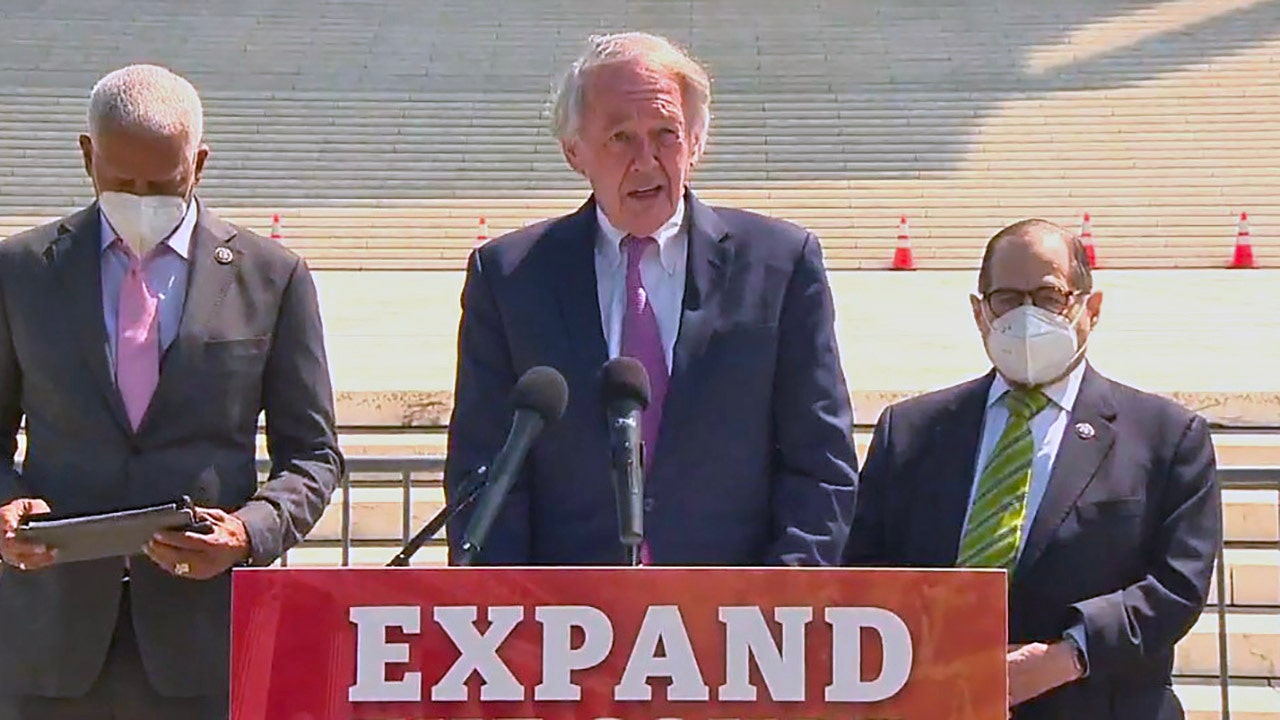