Mitu Gulati, a scholar of sovereign debt and contract law, will join the University of Virginia School of Law faculty in the fall.

“I’m not really sure how I got hooked on sovereign debt,” Gulati said of his scholarly work, which is steered towards governments and the organizations that advise them. “Maybe it is because it inevitably involves not just law, but politics, ethics, economics, sociology, anthropology and history. Bottom line: It is always fun.”

His research with eminent practitioner Lee Buchheit, a visiting professor at the University of Edinburgh, has on occasion served as the template for real-world sovereign debt restructurings.

“It is hubris to say that our obscure academic writings influenced the success or failure of any of these deals, but it is nice to pretend that that is the case,” Gulati said.

But Dean Risa Goluboff noted that such comments understate Gulati’s true influence: “Mitu Gulati is one of the leading people in the world on sovereign debt and has had a huge impact on the real world.”

COVID-19 has kept him busy in terms of his research on sovereign debt matters. The pandemic has hit the finances of many countries harder than almost any period in recent history, except perhaps the Latin American crisis of the 1980s, he said.

“In 2020 alone, government debt stocks increased from 2019 by around $12 trillion. That’s a staggering amount. And 2021 is looking to be in the same ballpark. The end result will be debt/GDP ratios around the globe that point strongly in the direction of being unsustainable.”

He added, “And it may turn out to be worse; maybe as bad as the Great Depression of the 1930s. Unfortunately, we have no coherent plan for a situation like this where 20 or 30 countries default simultaneously. The global financial architecture is not built to deal effectively with some of the contingencies that have become likely as a result of COVID-19.”

Since 2020, Gulati and Buchheit have collaborated with economics professors Patrick Bolton of Columbia University, Pierre-Olivier Gourinchas of the University of California at Berkeley, and Ugo Panizza of the Graduate Institute to devise ways to tackle the sovereign debt crisis they say is likely on the horizon. In a Financial Times op-ed published this week, Gulati and Buchheit lay out innovative ways countries could restructure their debts while investing in efforts to improve their nations, such as through environmental conservation efforts.

In other research, Gulati has frequently addressed the often-unexpected nature of contracts.

“Contracts are just not as finely crafted as the traditional law school class assumes or teaches,” Gulati said. “We generally operate on the assumption that all the provisions in a contract are the ones the parties wanted to properly allocate risk or return. But even highly sophisticated contracts are often produced quickly just to get the deals done. As for the contracts ordinary folks like us agree to, we generally have little clue as to what we are agreeing to. That’s a far cry from the paradigm of contracting parties fully understanding and wanting the provisions in their contracts.”

He said much of his understanding about the basics of how contracts work, or fail to, has been influenced by former UVA Law Dean Robert Scott, who is now at Columbia Law School, and their joint collaboration with Stephen Choi at New York University School of Law. Gulati visited at UVA Law in 2004.

Gulati’s interest in the flaws in the traditional assumptions underlying much of modern contract theory began around the time he was teaching at UVA Law, when he happened to have been assigned the office next to Scott.

“That then resulted in tennis games and, between games, conversations about aspects of real-world contracting in the sovereign debt world that struck Dean Scott as at odds with his view of how sophisticated commercial actors behaved vis-à-vis contracts.”

That semester at UVA was also when Gulati got interested in the idea of “odious debt.”

“The context was that this was when creditors began asking the newly reformed Iraqi government to honor the commitments of the overthrown Saddam Hussein regime,” he said. “The question was whether the new Iraqi government — the one that the U.S. had helped put in place after overthrowing Saddam — was obligated to pay the debts of the prior regime; debts that amounted to over $100 billion.

“That’s the so-called doctrine of ‘odious debts,’ an exception to the rule of strict governmental succession, where governments are liable for the debt of their predecessors, regardless of differences in political philosophies,” Gulati said. “The question we began to ask in 2004 was whether there really was, in international law, such a doctrine.”

Gulati said it was exciting to work on the idea alongside other faculty members interested in the question, including Scott, Professor Paul B. Stephan ’77, and former UVA Law professor George Triantis (now a professor at Stanford).

“The end result was that I found a whole set of new and exciting collaborators — and maybe, just maybe, we even managed to add to the literature,” Gulati said.

“Mitu Gulati has a uniquely wide and rich range of interests and scholarship,” Stephan said. “He always co-authors, and he always makes a significant impact. This shows both his brilliance and his generosity. He also is one of the nicest people on the planet.”

During the pandemic, Gulati, along with University of North Carolina professor Mark Weidemaier, began the podcast “Clauses and Controversies” in an attempt to generate asynchronous materials to keep students engaged. The show has now gone well beyond the two dozen students in the class that Gulati and Weidemaier teach, to over 10,000 listeners who are interested in sovereign debt.

His latest “obsession,” he said, is the Haitian “Independence Debt” of 1825, which he has featured on his podcast.

“This is perhaps the most odious debt in history,” he opined. “France made Haiti, which had successfully revolted against France, pay it 150 million francs in exchange for ‘recognition’ as a full nation. Not only was the amount staggering, many times even French GDP at the time, but France did its ‘negotiations’ with French gunboats in the Haitian harbor. Given that there is no doubt that France acted improperly, even by the laws and norms of 1825, the question is whether France owes a debt to Haiti today.”

Despite the time that has passed, and the idea that the historical debt may be mostly metaphorical in terms of present-day harm, he suggests in podcast episodes that there could still be a forum by which the unfairness is resolved.

Tue Mar 30 , 2021
ATLANTA — Critics of Georgia’s new Republican-backed election law issued fresh calls Monday to boycott some of the state’s largest businesses for not speaking out more forcefully against the law, a day after advocacy organizations filed a lawsuit in federal court challenging it. In a letter to more than 90,000 […] 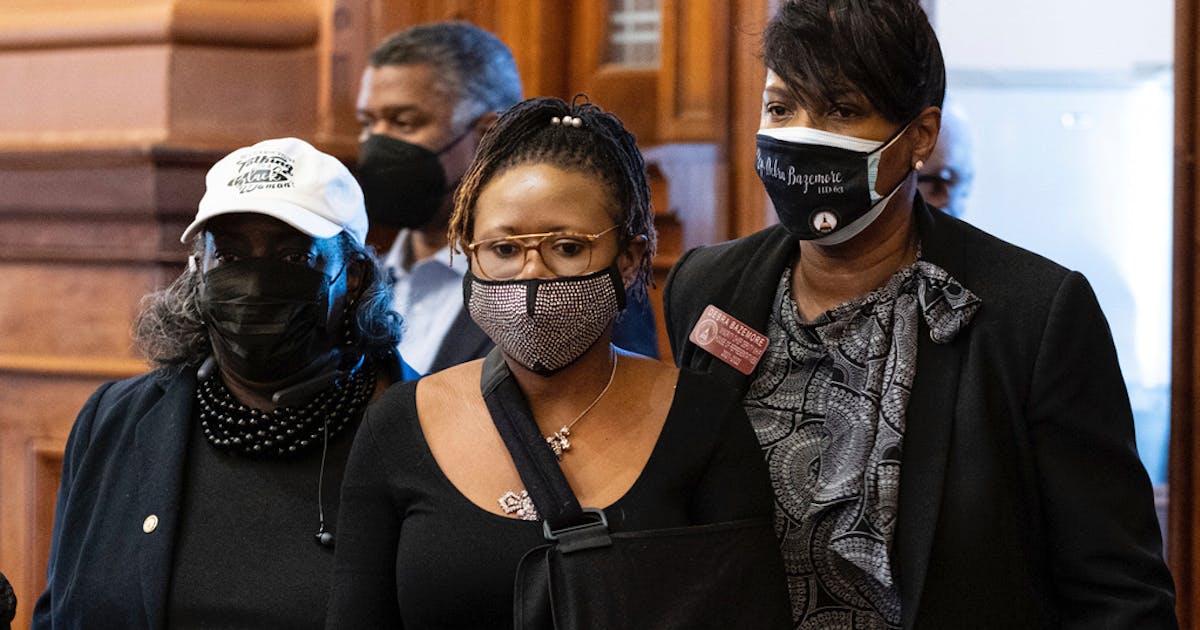