The House and Senate will soon confer on a bill to boost protections for police officers and to boost penalties for repeated protesting in public streets. Senate Bill 26, deemed “the public safety bill of the session” by supporters, also comes with an array of amendments tacked on by the House Tuesday.

The original bill by St. Charles County Senator Bill Eigel creates detailed conditions for a police conduct investigation, deters defunding of police departments and bans probation for a crime if a first responder is the victim.

Ballwin Republican Shamed Dogan got his colleagues to add limits on police use of force, including chokeholds and sex with detainees.

He told Missourinet he is confident because his amendment got 111 votes, “a pretty strong showing.”

For six hours of debate, House Democrats pushed back on the bill’s new punishments for blocking traffic or unpermitted assemblies in public streets. A third offense would become a felony and take away voting and gun rights.

“This is going to hopefully deter people from jumping in traffic without a permit,” he said 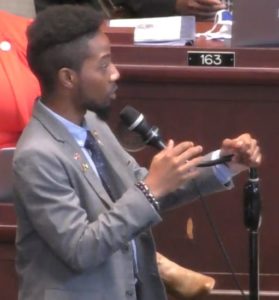 Aldridge in House debate May 4

St. Louis City Rep. Rasheed Aldridge was elected for his post-Ferguson activism, including Black Lives Matter protests on Interstate 70 that prompted this part of the bill. He—and Democratic leaders—took issue with Schroer’s characterization.

“If Martin Luther King and John Lewis did not get arrested, did not go to jail, who knows if we would have the civil rights that we have now. This bill isn’t going to stop protests. If this goes into effect, I’m not going to stop protesting, so I hope that I continue to serve in this body when y’all try to give me a felony if y’all think that I am that horrible of an individual,” Aldridge said.

Democratic leader Crystal Quade said, “The Black and Brown folks on this floor don’t like this bill. And we know that this bill disproportionately affects them. I am a white girl from southwest Missouri, this bill does not affect me. And they are begging and pleading for you to vote no on this bill.”

Rep. Justin Hill of St. Charles summarized for the super-majority as the debate wound down.

“This is why Republicans won majorities across the country, because of public safety. We’re done losing buildings to fires. We did not run on defunding the police, we ran on supporting the police,” Hill said.

The Florida Deplatforming Law is Unconstitutional. Always has Been.

Thu May 6 , 2021
Last week, the Florida Legislature passed a bill prohibiting social media platforms from “knowingly deplatforming” a candidate (the Transparency in Technology Act, SB 7072), on pain of a fine of up to $250k per day, unless, I kid you not, the platform owns a sufficiently large theme park.  Governor DeSantis […]