A former prosecutor has sued Pierce County, alleging he was fired from his job of 35 years after he filed a whistleblower complaint involving a contract he refused to approve for the County Executive’s Office.

Douglas Vanscoy said in his complaint he received a threatening email from a top county staffer for withholding his approval. The contract eventually was approved.

Vanscoy worked for the Prosecuting Attorney’s Office for 35 years and in 2003 became the chief of the civil division. He alleges he was fired in 2019 in retaliation for trying to address government misconduct.

“They fired a long-standing employee because they didn’t want him to keep doing public records requests and looking into it,” said attorney Jack Connelly, who is representing Vanscoy.

Vanscoy filed his lawsuit last month in Pierce County Superior Court. It seeks unspecified damages, but a claim for damages that he filed as a precursor to the lawsuit sought $3 million to $5 million.

Among other roles during his career with the county, Vanscoy reviewed proposed third-party contracts. The Pierce County Charter requires all such contracts to be approved by the Prosecuting Attorney’s Office.

The lawsuit claims Vanscoy received an email he found threatening when he declined to approve a $50,000 contract he found to violate county charter in 2018.

Marta O’Brien, one of the attorneys representing Vanscoy, said the contract was for legal services from the California-based firm Best Best & Krieger that involved telecommunications.

O’Brien said Vanscoy argued state law requires an attorney to be licensed to practice law in Washington in order to be deputized under such a contract, and that the BBK firm didn’t appear to have anyone that met that requirement.

“Based on his knowledge of the law and of the County’s contracting process, Mr. Vanscoy had a good faith belief that this contract was unlawful, and he refused to approve and sign the contract,” the lawsuit said.

When Vanscoy balked at approving the deal, Anderson told him via email: “You and your boss don’t want to go there. … The contract will be executed.”

The county’s response to the lawsuit, which is filed in the court records, confirmed that Anderson sent the email.

The News Tribune has made a public records request for the contested contract and emails pertaining to Vanscoy’s termination.

Though Vanscoy “openly and strongly opposed the contract as unlawful,” the lawsuit alleges, Anderson caused another county employee to misrepresent that the Prosecuting Attorney’s Office had approved it. The employee was not named in the lawsuit.

“Based on his experience as a deputy prosecutor and lawyer, Mr. Vanscoy had a good faith belief that the Executive’s Office employee’s conduct was a fraudulent act designed to corruptly conceal the employee’s actions relating to the third-party contract, and constituted misconduct, including felony forgery,” the lawsuit said.

An independent investigation by Seattle law firm Stradling, Yocca Carlson and Rauth was requested by Pierce County in response to Vanscoy’s whistleblower complaint and completed in April 2019. The investigation found the $50,000 contract was approved in January 2018 and amended to a maximum of $100,000 eight months later.

The report prepared by the Stradling firm concluded that in order to comply with the County Charter, the Executive’s Office should have better coordinated with the prosecutor’s office in finding and hiring outside counsel.

The 20-page report described the dispute between the two branches of county government as a “turf war.”

One of the questions asked during the investigation was if Anderson had violated county code in the contract preparation. According to the report: “Mr. Anderson did not coordinate with the (prosecutor’s office) early enough in the process of preparing the BB&K contract. It is less clear whether the BB&K contract was sufficiently ‘approved as to form.’”

The report also concluded that Anderson had not broken competitive bidding laws or criminal statues.

Vanscoy alleges the investigation was insufficient.

“Because the County Executive’s Office was involved, the investigator attempted to ignore the application of appropriate law and tried to assist the Executive’s Office by sidestepping the language of the county charter,” the lawsuit said.

In its response to Vanscoy’s lawsuit, Pierce County denied that the investigation was inadequate and asked that the lawsuit be dismissed and attorney’s fees awarded to the county and “for such additional relief as the Court may deem just and equitable.”

Vanscoy decided to launch his own investigation and requested public records connected to the case, according to the lawsuit.

“In an effort to maintain accountability within the Pierce County government, ensure that public funds were being appropriately handled, and that the county’s leadership was not engaging in further improper and unlawful conduct, and in an effort to explore and understand the findings set out in the investigator’s report, Mr. Vanscoy began his own investigation into the forgery and actions of the Executive’s Office,” the lawsuit said.

The Executive’s Office, the lawsuit notes, “has substantial influence during the county budget process over staffing and funding for the Prosecutor’s Office.”

Vanscoy alleges his former boss, Prosecuting Attorney Mary Robnett, told him to “stay away from the Executive’s Office” and that when he refused to stop his investigation, he was fired.

“Not one to be threatened or shy from the truth, Mr. Vanscoy was undeterred and continued his efforts to shed light on the government misconduct and obtain accountability,” the lawsuit said. “Mr. Vanscoy could not stop his investigation in good conscience, when the possibility remained that more violations could be occurring.”

He was fired after he reviewed public records about the investigation in October 2019, according to the county and the lawsuit.

“Learning conclusively that Mr. Vanscoy would not simply turn a blind eye and deaf ear to government misconduct, nor abandon his pending requests for public records relating to that misconduct, Defendant Pierce County terminated Mr. Vanscoy the next day without warning or explanation,” the lawsuit alleged.

Vanscoy argues the termination hurt his career, his reputation and his family financially and emotionally.

“The County’s abrupt and confusing termination of him has affected his otherwise sterling reputation,” the lawsuit said. “Further, Mr. Vanscoy was the primary wage earner for his family, including a teenager with physical challenges who has substantial ongoing medical expenses, payment of which required continued employment on the part of Mr. Vanscoy.”

This lawsuit is the second case this year claiming the county retaliated against a whistleblower.

Dammeier hired Mitchell in 2017. She was a part of the executive’s leadership team until her firing last July.

Her lawsuit accused the county of discriminating against whistleblowers. She was fired nine days after filing a legal brief in her whistleblower complaint.

The whistleblower complaint, which she filed last year, said she was retaliated against because she advocated for hiring women and minorities, gender equity, and an equal distribution of power between men and women in leadership.

Her lawsuit said she was fired “due to her race and due to her opposition to racially discriminatory and hostile practices being perpetuated by the government.”

Pierce County has denied her allegations and said she was dismissed lawfully.

Both lawsuits are pending trial.

Josephine Peterson covers Pierce County for The News Tribune and The Puyallup Herald.

Alexis Krell covers local, state and federal court cases that affect Pierce County. She started covering courts in 2016. Before that she wrote about crime and breaking news for almost four years as The News Tribune’s night reporter. 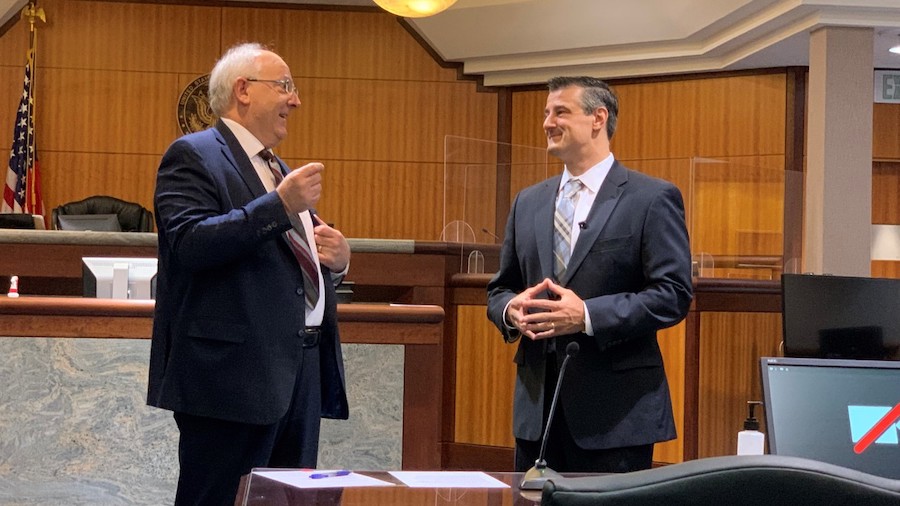