Throughout the COVID-19 pandemic, Italy has been one of the most affected nations worldwide. It is unsurprising that business relationships are facing unprecedented hurdles. Since the declaration of the state of emergency on 31 January 2020,(1) the government has enacted a series of restrictions, and issued different provisions, in relation to the COVID-19 pandemic.

This article focuses on case law and the courts’ approaches towards the force majeure and hardship principles in contract law within the context of the COVID-19 pandemic.

Article 91 of the Law-Decree 18 of 17 March 2020 (the so-called ‘cura Italia decree’) states that compliance with its provisions must always be considered when assessing a debtor’s contractual liability pursuant to Articles 1218 and 1223 of the Civil Code.(2) Scholars and the Court of Cassation (in its 8 July 2020 report) have criticised Article 91 of the law-decree for its lack of clarity.(3) In particular, it is unclear why the article refers to Article 1218 of the Civil Code, which excludes the liability of a debtor in the event of impossibility of performance. In fact, if the pandemic were to make performance impossible, the debtor would be exempted anyway, and the new provision does not change that.(4) Moreover, such provision does not exclude ex lege the liability of the debtor, but merely defers to the judge the assessment of the relationship between compliance with the emergency provisions and non-compliance with the contractual obligations. Against this background, it is necessary to provide a brief assessment of the possible legal consequences (and remedies) at parties’ disposal, especially in business relationships characterised by continuous performance for a prolonged period (eg, lease and rental agreements).

The pandemic is causing several difficulties in the performance of contractual obligations. Legislatures worldwide are aware of the possibility that, due to some critical occurrences, contracting parties may be excused for their non-performance of the obligations. Contracting parties should, in the first instance, rely on contractual mechanisms included in their agreements. The two most relevant examples are force majeure and hardship.The two traditional examples in Italy are force majeure and hardship. Taking as example the recently adopted International Chamber of Commerce model clauses:

The Italian legal system provides for different remedies that, once triggered, are apt to terminate contracts – namely, the termination of contracts because of:

The first remedy resembles force majeure and the second resembles hardship. It is still unclear whether (and whether affirmative, to what extent) such remedies apply in the case of contractual relationships affected by the pandemic, particularly in the absence of specific contractual terms in the agreement. The Court of Cassation’s report has found that neither remedy results in sufficient comfort.

As to the supervening impossibility of performance, it can be said that the pandemic did not render the performance impossible per se,(5) but merely (and not always) more difficult. However, it can be said that when the government addressed the pandemic through measures that (factually and legally) prohibited non-necessary activities, such measures constituted a factum principis, apt to excuse the non-performance.(6) However, even in such critical situations, it is unclear whether the remedy of termination because of the supervening impossibility of performance is adequate. The Court of Cassation’s report noted (both generally and specifically referencing to rental agreements) that the performance of leasing a property remains possible even when the corresponding obligation results in a weakening of this right because of the factum principis.(7) In a controversial decision by the Rome Court,(8) the judge blatantly rejected the defendant’s claim that it had been unable to pay rent because of a 72% decrease in revenue. After having confirmed that the pandemic cannot per se represent an impossibility, the judge proceeded by saying that only administrative acts could play a role.(9)

With regard to the supervening, excessive onerousness of performance, although it is probably (at least prima facie) a remedy more suitable to address the effects of the pandemic, it still does not convince judges(10) and scholars.(11) Pursuant to Article 1467 of the Civil Code, a contract may be terminated by the party whose performance has become excessively onerous because of unforeseen and extraordinary circumstances.(12) Paragraph 3 of Article 1467 states that termination cannot occur if the other party offers to equitably modify the contract.(13) However, such provision does not allow the disadvantaged party to request the reductio ad aequitatem, but rather only the termination.(14) Thus, it is a double-edged sword in the hands of such party, which cannot maintain the contract alive and request a modification. Therefore, as noted by the Court of Cassation’s report, it is not the most suitable remedy for business relationships where the disadvantaged party actually needs to maintain the contract alive (with the modifications).(15)

Preservation of contracts: towards a duty to renegotiate?

Since the remedies which terminate contractual relationships are neither adequate nor (at least most of the time) in the interest of the parties, the fundamental question is whether the renegotiation of contractual terms is the solution. Moreover, if the latter question is answered affirmatively, do the parties have a duty to renegotiate?(16)

The Court of Cassation’s report promotes the renegotiation of contractual terms – which is the ‘translation’ of the duty to renegotiate contained in hardship clauses – as the solution.(17) In particular, according to the report, the renegotiation of contractual terms comes within the sphere of application of the duty to perform contracts in good faith.(18) Thus, if a contract becomes excessively more onerous for one of the parties, good faith could impose to the parties (to try) to bring the contract within the boundaries agreed by the parties at the time of the conclusion of the contract.(19) Such argument has been brought before several courts in the context of pandemic-affected contractual relationships.(20) However, the courts have concluded with divergent positions. In certain cases, judges agreed that a general duty to renegotiate contractual terms exists, notwithstanding the language of Article 1467 of the Civil Code, which provides only for termination.(21) In other cases, judges plainly rejected the good-faith argument brought forward, stating that a provision which allows the disadvantaged party to request a renegotiation does not exist in the Italian legal system.(22)

Is there a duty to renegotiate?

Since it is impossible to force people to bargain, it should be impossible to oblige them to renegotiate.(23) Sophisticated business operators should have considered whether to include hardship clauses or other contractual mechanisms imposing renegotiation or alternative remedies other than termination in their contracts. The fact that they did not should be interpreted as a sign that they have agreed to bear the risk, possibly as a result of other strategies to insure or hedge against that risk. However, scholars have asserted that by limiting the remedies to the termination of contracts, the scope of contract law is thwarted as the latter will not redistribute the unforeseen events between the contracting parties, thus allowing situations of social contractual injustice.(24) The Court of Cassation’s report is straightforward when it states that renegotiation, in the face of contingencies that alter contractual relationships, becomes an obligatory step.(25) Some courts have started to follow this position;(26) however, it remains to be seen whether this will be the path for the future.

When it comes to pandemic-affected contractual relationships, everything is up for grabs. On the one hand, there are the traditional remedies aimed at terminating the relationship when the performance of either party has become impossible or excessively onerous. On the other hand, the renegotiation may find its place within the legal system, thus aligning the Italian experience to that of other legal systems and international practice. Overall, recent experience has confirmed the critical importance of a well-drafted contract. Courts should be cautious about reading into the contract a clause that the parties could have inserted, but did not.

(7) Page 4 of the Court of Cassation’s report states that:

Navigating the Legalities for Restaurants

Tue Mar 23 , 2021
Food is serious business. Now, on The Main Course, host Barbara Castiglia will invite insiders on the front lines of food to share their expertise, strategies, and forecasts for navigating the ever-changing restaurant industry.   The Main Course brings a new perspective to the world of restaurants by looking at the legalities involved […] 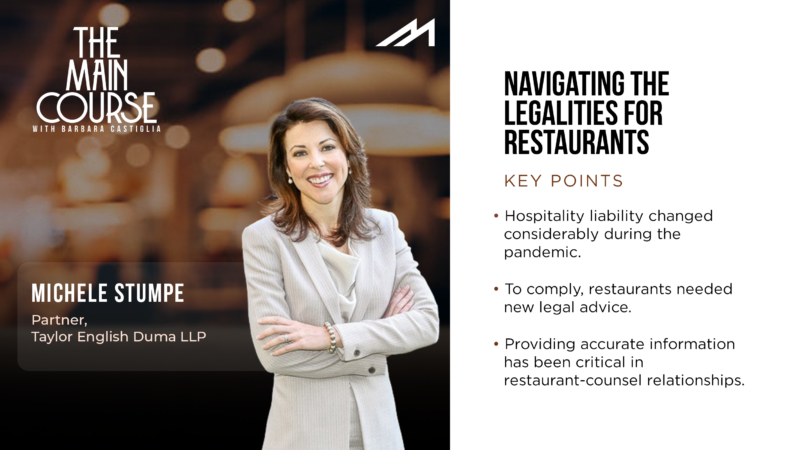