CARTHAGE, Mo. — The Carthage City Council recently approved measures that will lead to upgrades in the city’s website and provide guidance for city employees and council members on how to use social media while representing the city.

The council voted unanimously to adopt a new social media policy for all city employees and officials on how they use social media and how they manage public comments on Facebook and other social media pages. The new policy also designates Callie Myers, director of the Carthage Convention and Visitors Bureau, as the city’s social media administrator.

In a separate vote, the council approved a contract with the Manhattan, Kansas-based company CivicPlus to build and operate a new website at a cost of $99,426 for the first year and $37,255.05 annually for at least two years after. The new website is expected to go live Jan. 1.

Greg Dagnan, assistant city administrator, said the city will change how it uses social media to more closely follow requirements in state law and recent case law. New rulings in state courts say when cities use sites like Facebook, they have to be careful, especially when they allow public comments on posts, he said.

“There’s a lot of emerging case law that has to do with social media, and some of that really discusses when a city puts up a post on Facebook, Instagram, whatever, then basically allows a response, it becomes a public forum,” Dagnan said. “It’s comparable to if you stand in that podium in the City Council chamber during a meeting and talk. (If) I tell the police captain to tackle you (and that) you shouldn’t talk, that’s equal what it’s like to delete comments from the public forum.”

• Prohibiting personal use of city computers on city time.

• Governing what city employees and officials can post to social media sites representing the city.

• Governing whether official city social media sites will allow public comments online or be limited to only providing information without allowing public comment.

Dagnan said the first two components are standard. The third component is more complicated and involves changing how city departments use social media and allow the public to comment.

Dagnan, who still officially holds the post of police chief, gave the police department’s Facebook page as an example. He said people will notice that they can no longer comment on posts by the department.

“There won’t be a chance for comments anymore,” he said. “If you do that —if you give a call for action, a way they can communicate, but then don’t have the comments on the page — it actually could be easier and more efficient for officers.”

With the new policy, the department also wouldn’t have to archive and save comments as required by open-records laws or make decisions as to whether to delete comments that may be offensive or come close to being dangerous, he said.

Dagnan said the city is leaning toward closing comments on all its official social media sites, although there may be exceptions. The rules also would apply to sites run by current elected city officials.

The council has hired the Lauber Law Firm from Lee’s Summit to hold a virtual training session in August for council members on the laws regarding social media and elected officials.

The city’s official website, carthagemo.gov, could offer more services for Carthage residents when it relaunches.

Mark Peterson, director of the parks department, said the city recognized, in part because of the COVID-19 pandemic, that it needed to offer more services to the public online than the current website was capable of offering.

“We need to be as accessible as possible, so we’re trying to invest in tools that create more dialogue with the community,” he said. “We want more input from them, we want to interact with them, we want them to be a voice in what’s happening. For us, that starts out with a more advanced website that also involves a mobile app so that people can access information more easily.”

One new service will be livestreaming City Council and other meetings over the internet.

Dagnan said the council budgeted about $25,000 per room at City Hall to add cameras, video screens and other equipment, as well as a meeting room on the second floor of City Hall to allow for livestreaming of council and committee meetings.

Sat Jul 24 , 2021
SACRAMENTO —  At a time when labor unions are struggling across the United States, California on Friday signed a first-time contract with 40,000 child care providers under a new collective bargaining agreement. With his signature, Gov. Gavin Newsom ratified the contact with Child Care Providers United, increased wage rates and began […] 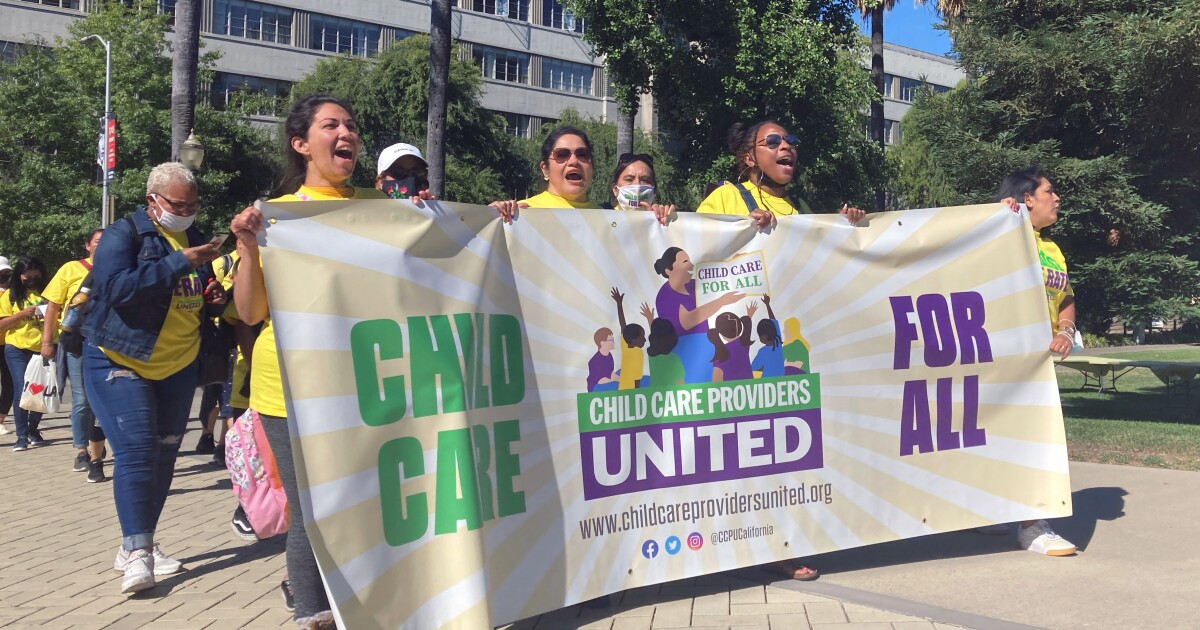