The White House’s focus on rising domestic extremism has sparked a debate over whether the U.S. needs new laws to fight it, with some groups concerned that such measures could lead to over surveillance of communities of color and infringe on First Amendment rights.

The Jan. 6 riot that overran the Capitol and left multiple people dead has prompted the Biden administration and Democrats in Congress to prioritize white supremacists and various right-wing anti-government extremists as a top national security concern.

It’s still unclear how much momentum is behind any potential new domestic terrorism statute or what it would ultimately look like, but lawmakers’ focus on the issue is already prompting debate about whether such legislation is needed and if it could do more harm than good.

Civil rights advocates are concerned that any bill adding punitive measures or increasing surveillance powers would expand a national security and law enforcement regime that some say is already overpowered and often focuses its force on disadvantaged groups in the U.S.

Those concerns may be deadening Democrats’ appetite for the type of legislative overhauls like those that Congress quickly passed in the wake of 9/11, such as the PATRIOT Act, which would likely open a rift with the progressive wing of the party.

Proponents, however, say there are currently gaps in the law that steer national security and law enforcement resources towards terrorism with ties to groups like al Qaeda and ISIS at the expense of homegrown extremism.

Mary McCord, executive director of the Institute for Constitutional Advocacy and Protection at Georgetown University, has argued the law needs to be bolstered to cover growing trends including mass shootings and vehicle attacks.

“Part of what this gap means is the lack of moral equivalency between Islamic extremist terrorism and other types of extremist motivated terrorism and most specifically white supremacist-motivated terrorism, which is the most significant and most lethal threat in the U.S.,” said McCord, who previously served as acting assistant attorney general for national security in the Obama administration.

“But having said all of that, significant opposition to new terror statues from the civil rights community, of which I consider myself a part, is due to entrusting law enforcement with any new tool that could be misused or abused to target groups like BLM [Black Lives Matter] or antifa or groups that actually don’t represent a danger in homeland.”

U.S. law has an entire statute dedicated to terrorism, which includes specific carveouts and penalties for foreign terrorism. Those are further bolstered by a smattering of state laws on domestic terrorism and militias.

Those pushing back against a new statute argue those are sufficient for prosecuting domestic terrorists.

“The burden is on those who are promoting a radical departure from domestic criminal statutes to show how cases would slip through the cracks,” said Brian Levin, a criminal justice professor and director of the Center for the Study of Hate & Extremism at California State University at Santa Barbara. “I don’t know of any particular plot or executed attack that is incapable of being thwarted or punished by laws that exist now.”

Critics also argue an additional statute is a poor method for trying to get federal law enforcement to heighten their focus on groups that FBI Director Christopher Wray has highlighted as the greatest domestic threat.

Michael German, a fellow with the Brennan Center who worked on domestic terrorism cases as an undercover FBI agent in the 1990s, said “it is pure nonsense that there isn’t a statute to address domestic terrorism.”

German argued, however, that prosecutors don’t need to see the words “domestic” next to “terror” in order to make use of the existing laws.

“It is semantic gamesmanship they play rather than addressing the real issue, which is that the FBI and DOJ deprioritize investigations of white supremacist and far-right violence as a matter of policy and practice, and often ignore it altogether, leaving it to state and local law enforcement,” he said.

“The reason I think it would be helpful is without it you’ve got to get these people for other crimes like transporting weapons across state boundaries or much less serious crimes and in some cases the jail sentences are much shorter than you might have under a domestic terrorism statute,” said Seth Jones, director of the international security program at the Center for Strategic and International Studies.

Jones stressed the need to get court orders before doing any surveillance but said upping penalties for domestic terror could help balance a system geared toward addressing Islamic extremists “that to me seems way out of whack.”

The debate has surged in the months since Jan. 6, with many in Congress still furious that the Capitol was threatened by people seeking to halt the certification process of the 2020 election out of loyalty to former President Trump

“I think as a general sentiment, we have to do something,” Rep. Bennie Thompson

Bennie Gordon ThompsonLawmakers roll out legislation to defend pipelines against cyber threats Lawmakers reach agreement on bipartisan Jan. 6 commission House lawmakers roll out bill to invest 0 million in state and local cybersecurity MORE (D-Miss.), the chairman of the House Homeland Security Committee, said during a hearing in February. “We have a number of members who have expressed an interest so I’m sure somewhere there will be agreement on specific legislation.”

But some see the Capitol riot as evidence that law enforcement at all levels was, perhaps willfully, blind to the threat of domestic right-wing extremism, not that they were powerless to stop it.

In a tweet sent just three days after the riot, Rep. Alexandria Ocasio-Cortez

Alexandria Ocasio-CortezWarren calls for US to support ceasefire between Israel and Hamas The Memo: Lawmakers on edge after Greene’s spat with Ocasio-Cortez Sanders: Netanyahu has cultivated ‘racist nationalism’ MORE (D-N.Y.) pushed back against the immediate calls for domestic terror laws.

“Our problems on Wednesday weren’t that there weren’t enough laws, resources, or intelligence,” Ocasio-Cortez wrote at the time. “We had them, & they were not used.”

Levin, a former New York police officer, said that the problems leading up to and during the riot were “more tactical than strategic” and are unlikely to be addressed by adding more punitive measures for domestic extremists.

“Why would we give sharp tools to entities that have already failed to use the existing ones?” he asked. “The Capitol insurrection was a failure of coordination, intelligence and personnel and resource allocation, rather than some glaring gap with regard to legislation.”

Biden officials have taken pains to highlight the risks of white nationalism, with both Attorney General Merrick Garland

It’s still unclear, however, whether the Biden administration will back any legislative efforts to add more law enforcement authorizations or increase punitive measures for domestic terrorism. A Justice Department official told Congress earlier this year that the agency was reviewing whether to request any such legislation.

Levin said that any push for legislation needs to take into account the potential for abuse of power with new authorities.

“We need an oil change and a tune-up, not a new car, and we certainly have to be concerned about who’s going to drive that car, not only this administration but subsequent ones,” he said.

Under California law, 'spousal rape' gets special treatment. A new bill could change that

Sun May 16 , 2021
Kolieka Seigle, president of California NOW, is advocating for legislation that would change the state’s “spousal rape” law. (Stephen Lam / San Francisco Chronicle) Who would have thought, in the year 2021, that a man who rapes his wife in California is guilty of a lesser crime than a man […] 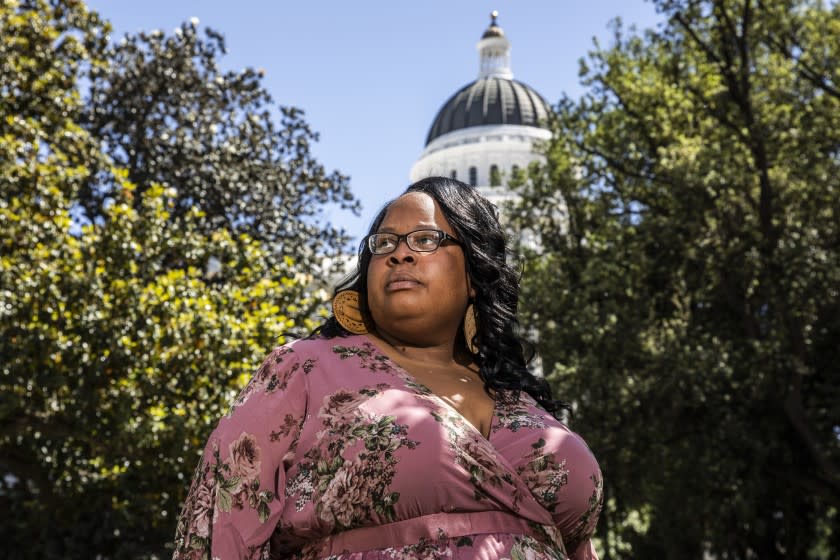