At the end of December, Deputy Mayor for Health and Human Services Wayne Turnage came to D.C. councilmembers with an emergency. The District’s Medicaid contract, which, at $1.5 billion, is among the largest that the D.C. government hands out, was in trouble.

Turnage lobbied councilmembers on emergency legislation that would essentially sidestep a Contract Appeals Board ruling on the District’s violation of procurement law and create an exemption for MedStar, one of the three companies chosen to manage health care for Medicaid beneficiaries. The goal, he says, was to avoid yanking 67,000 of the most “medically fragile” residents from one health insurance plan to another twice in one year.

“My view, and the mayor’s instruction to me, was we need to make sure we’re not being too disruptive to the residents of D.C. who are on Medicaid and are reliant on the program,” Turnage says.

Turnage’s proposed legislation was never formally introduced, and he says he’s working with Bowser’s advisors on another potential solution. He declined to elaborate.

Turnage’s failed proposal, and his continued search for a way to prevent further disruption for Medicaid enrollees, comes after a judge found that the D.C. Office of Contracting and Procurement broke the law when it awarded the contract to three companies, just as it did in 2017.

In June of 2020, OCP picked MedStar, CareFirst, and AmeriHealth to manage health care for D.C.’s Medicaid enrollees. In July, Amerigroup, which was replaced by MedStar in the new contract, filed a protest with the Contract Appeals Board. On Oct. 1, while Amerigroup’s case was still pending, D.C. began shuffling some 175,600 Medicaid beneficiaries to new health plans.

Turnage says the “torturous” three-month process included reassigning Medicaid beneficiaries across all three of the plans under the new contract, not just moving Amerigroup’s clients to MedStar.

Residents called the Department of Healthcare Finance in tears, Turnage says, after their new health plans resulted in canceled surgeries and appointments. The transition was so chaotic that the enrollment broker crashed, Turnage says, and at one point the abandonment rate for people seeking help over the phone was 80 percent.

When the reassignments were complete, the 238,430 adults enrolled in D.C.’s Medicaid program were divided among the three companies, with MedStar covering more than 67,000 people, nearly 30 percent of all beneficiaries.

On Dec. 1, the Contract Appeals Board upheld Amerigroup’s protest, which alleged more than 10 violations. Judge Nicholas Majett found that OCP judged Amerigroup more harshly than MedStar on its past performance and violated both the law and the terms of its own solicitation.

Majett did not weigh in on the rest of Amerigroup’s allegations, but added in his opinion that “Amerigroup may have received a contract award” if the contracting officer had followed the law and the terms of the solicitation. The board ordered OCP to re-evaluate the proposals. That process is still pending. If any of the three companies are eliminated, they’re allowed to complete the first year of the contract, which ends on Sept. 30 2021.

But in its re-evaluation, OCP must factor in Majett’s ruling in another case. In August 2020, Majett ruled that vendors’ proposals must include a plan for how they will subcontract with small local businesses, known as certified business enterprises. D.C. law says the plan must be included in the initial proposal, but for years OCP had allowed subcontracting plans to come in much later in the process.

That decision could pose a problem for OCP and MedStar because, according to Turnage’s presentation to D.C. councilmembers, MedStar did not submit a CBE plan in time to comply with the law. Their proposal therefore would be disqualified if OCP is forced to re-evaluate it.

That’s when Turnage, with Mayor Muriel Bowser‘s blessing, turned to councilmembers for emergency legislation that would sidestep the judge’s order and give MedStar and OCP a pass. Contract Appeals Board general counsel Mark Poindexter declined to comment.

“It looks like we’re trying to help MedStar because MedStar is the one that has the members,” Turnage says. “But if it were Amerigroup or any other plan that was similarly situated, we’d be doing the exact same thing.”

He notes that a similar scenario played out in 2017, the last time OCP awarded Medicaid contracts. But back then, MedStar filed the protest after it was replaced by Amerigroup.

“I cannot support an emergency measure that ignores our CBE laws at the expense of the District’s small businesses,” Ward 5 Councilmember Kenyan McDuffie tells LL. “To make an exception for one company would disregard all the other companies that have complied with the law.”

McDuffie raised concerns about the Medicaid contract last summer, before the CAB upheld Amerigroup’s protest, during a special roundtable held during the Council’s recess. He says the CAB’s decision in December confirmed some of the concerns he raised during the hearing.

“If the agencies responsible for implementing these laws take seriously the mayor’s priority of supporting CBEs, then OCP would not be violating this law,” McDuffie says. “This is more than an oversight. It’s more than a technicality. This substantively violates existing CBE law, and I would argue in the process, it deprives the District’s small businesses of important contracting opportunities.”

A spokesperson for the D.C. Department of Small and Local Business Development did not respond to multiple requests for comment on the Bowser administration’s proposed emergency legislation.

Ward 3 Councilmember Mary Cheh takes a different perspective. She told Turnage when they spoke in December that she wasn’t necessarily opposed to the emergency bill. But she needed more details.

“I’m just a little skeptical of the whole thing,” she says, noting that there’s a potential argument to be made against the CAB’s ruling on subcontracing plans.

If, for years, OCP has allowed vendors to submit subcontracting plans later in the bid process, as the District has argued, “that sort of becomes the law,” Cheh says. “Like reliance interest. Something’s been happening, and you begin to rely on that being the method of operation.”

While Turnage works with Bowser’s advisors to come up with a new solution, he is sure of one thing: If MedStar is eliminated one of the three health plan providers, Amerigroup will still lose. Turnage says the District will go forward with only two health plans rather than three.

“I can say this with certainty,” Turnage says. “If we end up with two plans as a result, at the end of the day, we will not bring a third plan into the system. We will basically take the members in MedStar and allow them to pick between the remaining two plans.”

“Amerigroup D.C. has existing contracts with all critical providers in the District, with the exception of MedStar,” the statement says. “We have repeatedly attempted to negotiate in good faith a contract with MedStar and would continue to do so if we were awarded a contract. Any assertion that we would not be able to provide members with a comprehensive provider network is incorrect. We are willing and able to fully comply with the universal contracting provision that was part of the procurement and remain committed to providing quality healthcare and support services to District residents.”

Wed Jan 27 , 2021
By Aram Roston WASHINGTON (Reuters) – Enrique Tarrio, the leader of the Proud Boys extremist group, has a past as an informer for federal and local law enforcement, repeatedly working undercover for investigators after he was arrested in 2012, according to a former prosecutor and a transcript of a 2014 […] 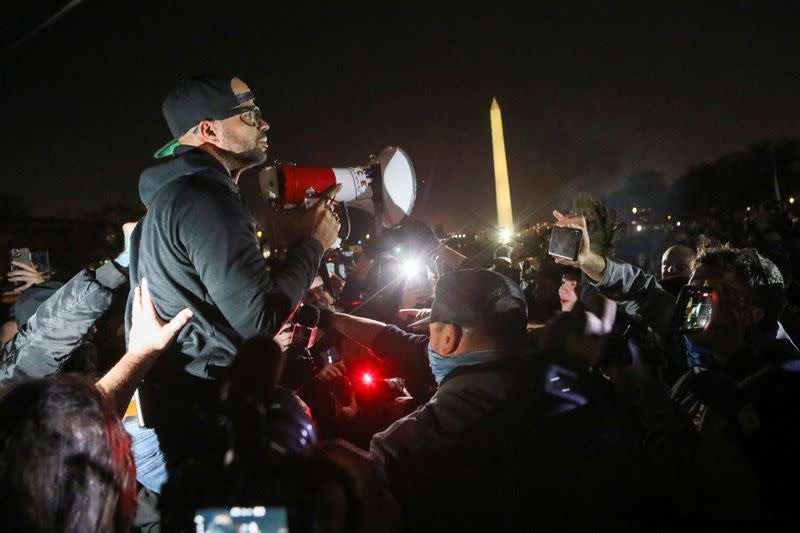