It was zero-hour 6 p.m. on Friday, May 7 as five local law students in five locations were simultaneously trying to log into the website for the State Bar of California.

The students, ranging in age from 27 to 44, are Isela Welz, Shannon Miller, Misty Franklin, Katherynn DeLeon and Ajaib Gill.

It’s been years since aspiring attorneys graduated from a law school located in Bakersfield, and now the five were checking to see whether they had each passed the all-important state bar exam.

The stakes were high — for the students and for the new local law school known as the Kern County College of Law.

“I was at a bar, trying to find some liquid courage,” said Misty Franklin, a mother of four and a former teacher who endured three and a half years of challenging courses and grueling work to get to this moment.

The five students were hesitant to celebrate too publicly on social media unless all five passed. After sharing years of work and the emotional ups and downs of completing the paper chase of a lifetime, they had become bonded. They had become family.

But the odds were against them.

“Statistically, there was no way we were all going to pass,” Franklin said.

In fact, only 37.2 percent of those who took the state bar exam in February passed it. The odds were not good.

But Franklin finally gained access to the web page and learned that she had passed. Within minutes she was informed that all four of her colleagues had passed as well.

It was finally over. And it was just beginning.

Ajaib Gill had never planned on going to law school. Married, with three kids, he currently works full-time as the business manager for the Kern County Assessor-Recorder.

But Gill already has applications pending at the county Public Defender’s Office and County Counsel’s Office.

“When I heard a law school was opening in Kern County, I was intrigued,” he said. “Brandon Martin, a high school classmate, was one of the first-year professors and he encouraged me to apply.”

Gill said he enjoys his work at the assessor’s office and has done well there. But a new chapter was calling.

“I got to thinking that I had 25 years left to work and was fascinated by the challenge,” he said. “Lawyers are in a position to make a real impact on people’s lives. It truly is a noble profession.”

But few people can handle the schedule required to get there — and the red-eyed exhaustion that comes with it.

“I attended classes almost year-round, three to four nights a week. It wasn’t easy on my family,” Gill said. “I would go from work directly to school and come home at 9:30.

“Weekends were often taken up reading cases and preparing assignments,” he said. “During bar prep, I was at the college from 8 a.m. until 10 p.m. every day for almost two months. I missed a lot of time with my family, and that was probably the toughest part about the whole experience.”

Can a new law school stop the attorney turnover?

This first class of students at Kern County College of Law formed in 2017, said Cathy Bennett, an appellate attorney at Klein DeNatale Goldner who also is a law professor at KCCL.

About 16 students originally started in the school’s first year in 2017. But like all challenging academic pathways, their numbers dwindled.

“A couple had health problems, a couple had family issues,” Bennett said.

Some of those students remain enrolled, but will take longer to graduate.

Six students graduated in December. Five took the bar in February and passed. One graduate, AJ Alejandro, elected to take the bar in July.

Bennett and other faculty members say having a law school in Bakersfield doesn’t just fill a need for students, it is good for Kern County.

“One problem we have is attracting qualified professionals, not just lawyers,” Bennett said.

Many new attorneys come here for their first job, get trained, and then leave. But most students at KCCL have roots here, family here, and they intend to stay.

“They are trained to serve their community,” Bennett said.

Kern County Deputy District Attorney Hunter Starr was sitting in a barbecue restaurant in Texas when he heard the news that all five students had aced the exam.

“I jumped up and yelled something like ‘Yeah!'” he said. “The whole restaurant was looking at me.”

Starr, who is also a law professor at the college, had reason to celebrate.

Starr’s father, retired prosecutor Bud Starr, serves as the dean of the local college of law. The elder Starr, who was awarded the Kern County Bar Association’s highest honor, the Bench and Bar Award, in 2016, said the faculty is proud of the five students.

“When five out of five pass the bar, that’s rare,” he said.

For a number of years, Starr said, there was another law school based in Bakersfield, the California Pacific School of Law.

That school’s last class graduated in 2002, he said. But the structure of the schools is quite different.

“We are a nonprofit satellite campus of the Monterey College of Law,” he said.

“We were really lucky the community supported us,” Starr said. “The first year, the Kern County Bar Association let us use their conference room.”

The law school rented space on the second floor at Chain Cohn Stiles in year two.

Isela Welz, one of the five, wanted to be a math teacher when she was growing up in Shafter. But life is full of happy accidents.

“I landed a job as a file clerk while going to BC and here I am,” she said.

“When I first started telling people I wanted to go to law school, the majority were supportive and encouraging,” she remembered. “But one person who I looked up to told me I had two strikes against me: I was a girl and I was Mexican. That just helped me stay committed to my goal.”

She was the second of six kids growing up, and while she has no children of her own, Welz said she plays a big part in raising her nieces and nephews.

“Being an example to my nieces is what keeps me working so hard. I want them to know they can grow up to be whatever they want to be,” she said.

The youngest of the five law students, Katherynn DeLeon, graduated from UC Irvine in 2016. She started working for a civil law firm, and stayed for three years before joining the Kern County District Attorney’s Office.

“When the college of law opened up, I realized I could work and go to school at the same time,” DeLeon said.

It seems to have worked out for her.

“I still have to be sworn in,” she said. “But I’ve been doing everything a lawyer can do for the past three months.

“I love working at the D.A.’s Office,” DeLeon said. “I love helping victims.”

All five talked of the bond that was created between them, and of the admiration and gratitude they feel for the law professors at KCCL.

“We had each other’s backs,” she said of her fellow graduates. “They’re my family.

“We spent every night together for years. I don’t think we’ll ever stop talking. We’ll always be family.”

Shannon Miller, a fifth graduate, was in Las Vegas when she learned that she and all four of her friends had passed the bar.

“This whole experience has been surreal,” Miller said. “Then when all five of us passed … I wouldn’t be here if it wasn’t for them.”

Gill agreed with his fellow graduates.

“This is one of the most exciting events of my life, and is the accomplishment I’m proudest of,” he said.

“I’ve received so many calls, texts, Facebook and LinkedIn messages from family, friends, faculty, and even members of the local legal community congratulating me.

“Every single one of them makes me smile,” he said.

“The fact that all five of us passed makes it just perfect.”

Sun May 16 , 2021
Zimbabwe’s High Court dealt a blow to President Emmerson Mnangagwa on Saturday, ruling his decision to extend Chief Justice Luke Malaba’s tenure by five years was invalid because it breached the constitution. The Judicial Service Commission (JSC), which employs all judges, said the decision means that Deputy Chief Justice Elizabeth […] 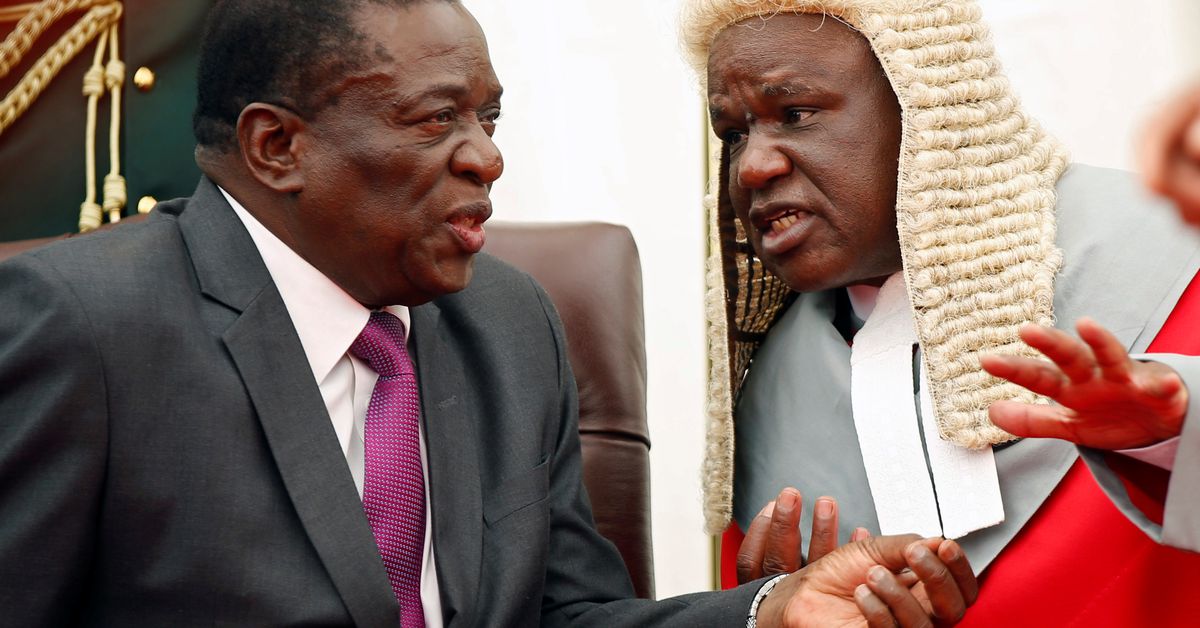