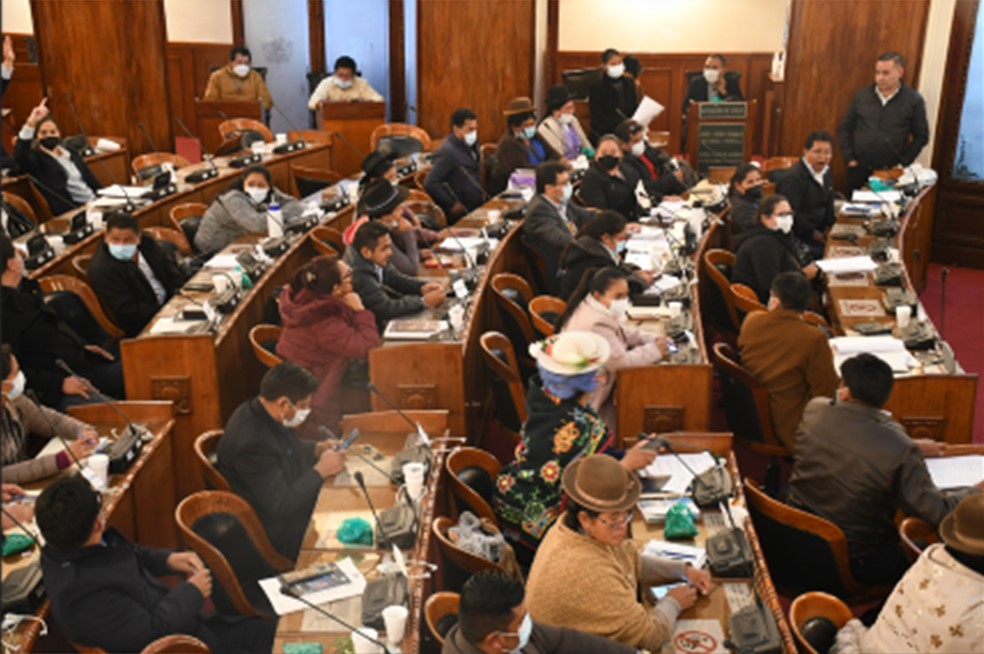 This Chamber of Deputies release was published using machine translation.

Deputies Press, May 14, 2021.- After nine hours of debate, the plenary session of the Chamber of Deputies approved yesterday, in its station in large and detailed, by an absolute majority (vote by sign), Bill No. 151 / 2020-2021, which aims to “Approve the Modification to the oil services contract for the exploration and exploitation of reserved areas in favor of YPFB (Yacimientos Petrolifos Fiscales Bolivianos), corresponding to the Charagua area located in the department of Santa Cruz” .

This is the amendment to article 2 of Law No. 858 of November 28, 2016, which establishes the authorization of the subscription of the Petroleum Services Contracts corresponding to the Charagua Area where “YPFB CHACO SA” is included as part of the Mixed Company – SAM, together with YPFB and the company YPF Exploración & Producción de Hidrocarburos de Bolivia SA, for fields declared commercial.

Once the declaration and approval of the commerciality of the fields within the area of the contract indicated in the previous article of this Law has been issued, YPFB and the holder of the exploration period are authorized to sign the Assignment Agreement established in the Annex “G” of the Petroleum Services Contract, in favor of the Mixed Economy Society – SAM, to be established between YPFB and the companies YPF Exploración & Producción de Hidrocarburos de Bolivia SA and YPFB Chaco SA, for fields declared commercial ”, indicates the article 2.

Regarding article 3, In the event of exploratory success in the CHARAGUA Area, YPFB is authorized to create a Mixed Economy Society – SAM, with the company YPF Exploración & Producción de Hidrocarburos de Bolivia SA and YPFB Chaco SA, with the Subject itself to the provisions of Paragraph I of the Tenth Final Provision of Law No. 466 of December 26, 2013, on the Public Company.

In this context, the president of the Commission for Plural Economy, Production and Industry, Deputy Lidia Tupa, affirmed that “the modification was approved to continue with the exploration and exploitation of hydrocarbons.”

“As a Chaco, I know the benefits of a department and a gas-producing country. We have to invest to make a profit. We are not only acquiring obligations, but also rights ”, he remarked.

The Minister of Hydrocarbons, Franklin Molina, who also participated in the session, technically explained that the Charagua area, if its exploration is successful, the maximum gas production could reach 6.4 million cubic meters, when it reaches its Maximum potential.

“The contract will be valid for 40 years. Its initial investment is 122 million dollars, in the exploratory phase, and it is expected that, in case of success, an investment of more than 1,054 million dollars ”, he emphasized.

Molina also remarked that oil activity is a risky activity, therefore, “there is always a possibility of success or failure. If we do not advance with the approval of the assignment of this contract, I believe that we would be putting in serious risk the paralysis of the exploratory activity of the country, and I am referring to a series of exploration projects ”.

On the contrary, the head of the bench for the political group Comunidad Ciudadana (CC), Carlos Alarcón, pointed out that the company with Argentine capital has the obligation to inspect the Charagua field, and it is not known whether it was carried out. You should be at your 100% exploration by now.

“They camouflage the joint venture contract (the state cannot have risk) of a service provision contract, that implies that Bolivia assumes the risk,” he argued.

In this regard, the deputy for the Movement Toward Socialism (MAS-IPSP), Jerges Mercado, argued that, on the other hand, this is a great opportunity for Bolivians to reactivate the economy and that the rule will allow the subsidiary company of the Chaco associated with the company YPF de Argentina, which had assigned 100% of the Charagua area.

“Passing this Law means that we are going to have 9,500 million dollars of oil income, it will translate into royalties for the governorates, taxes for the universities, it will be a budget for the municipalities, and not doing so would mean taking that away from our country and our region. their institutions ”emphasized Mercado.

On January 16, 2017, the Petroleum Services Contract (CSP) for the Exploration and Exploitation in Reserved Areas was signed in favor of the Bolivian Fiscal Oil Fields (YPFB) corresponding to the Charagua Area, signed with the company YPF Exploración & Producción de Hidrocarburos de Bolivia SA – YPF E&P Bolivia, authorized by Law No. 858 of November 28, 2016 and approved by Law No. 955 of June 9, 2017.

Charagua is located in the department of Santa Cruz, in a traditional area, with a surface area of 99,250 hectares, it has predominantly a Guaraní population and has a significant historical value for having been the scene of the Chaco war in the 1930s. resources of approximately 2.7 trillion cubic feet (TCF) of natural gas.

Sun May 16 , 2021
STATEN ISLAND, N.Y.— NYPD and other law enforcement groups are not welcome at this year’s Pride parade in Manhattan, according to multiple reports. The non-profit group that organizes the parade, NYC Pride, has moved to “ban corrections and law enforcement exhibitors at its events until 2025,” according to a statement […] 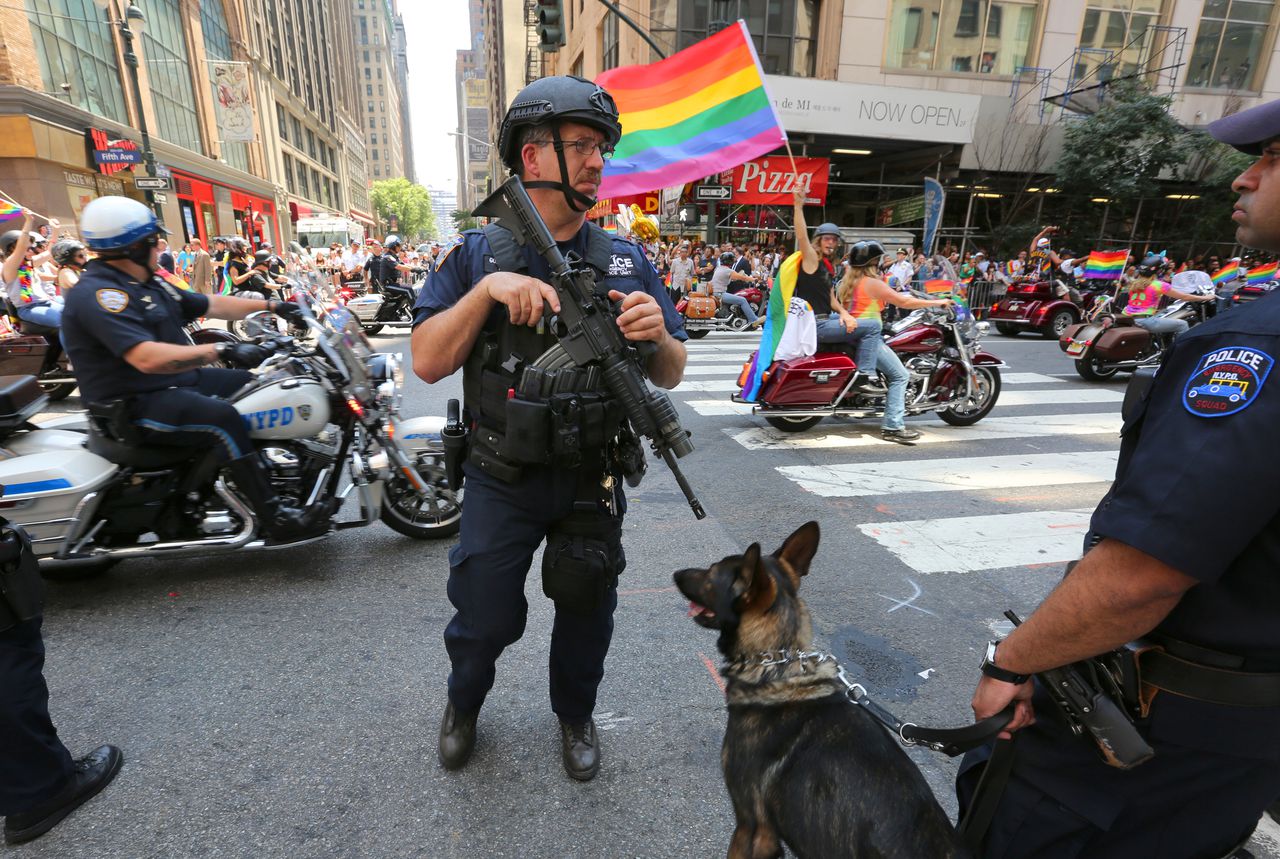