The Biden administration plans to immediately cancel its Immigration and Customs Enforcement contract with the Bristol County Sheriff’s Office and to transfer its seven immigrant detainees elsewhere amid an ongoing federal investigation into alleged civil rights abuses at the county jail.

The Washington Post reported Thursday that Alejandro Mayorkas, Department of Homeland Security secretary, ordered ICE to cancel its contract with both BCSO and the Irwin County Detention Center in Georgia, which faces a separate federal probe into allegations that women detainees were subjected to unwanted procedures.

The move comes as the Biden administration looks to address a host of immigration issues. It also follows Massachusetts Attorney General Maura Healey’s December investigative report that alleged BCSO personnel deliberately used excessive and disproportionate force after 10 ICE detainees refused to consent to COVID-19 testing and isolation at the C. Carlos Carreiro Immigration Detection Center in Dartmouth on May 1, 2020.

BCSO “acted with deliberate indifference to a significant risk of serious harm to the health of several detainees,” unlawfully using dogs and excessive pepper spray on detainees potentially infected with the virus during the incident, which began nonviolently, according to the report.

BCSO has also faced civil actions linked to public health, safety and overcrowding. Iván Espinoza-Madrigal, executive director of Lawyers for Civil Rights in Boston, noted in a statement Thursday that a federal judge overseeing the group’s civil lawsuit against BCSO ordered the release of dozens of detainees so they could quarantine safely last year. The judge ruled that the government had been “deliberately indifferent” to detainees’ risks of contracting COVID-19.

In a statement to MassLive in December, BCSO accused Healey of “demonizing” corrections and law enforcement personnel with a “politically motivated stunt.” BCSO noted that the attorney general’s office did not interview Sheriff Thomas Hodgson about the incident. Jonathan Darling, BCSO spokesman, said at the time that Hodgson would not resign over the matter.

“The report … is littered with baseless allegations and assumptions, and was clearly written and released to advance her long-documented anti-ICE, pro-illegal immigrant political agenda,” BCSO said. “The corrections teams at the BCSO risked their lives to quell a violent altercation with criminal illegal aliens on May 1 and did so with the upmost professionalism. We stand by the response to the incident, and look forward to the results of the truly independent investigation currently being worked on by the Department of Homeland Security’s Office of the Inspector General.”

The Post, citing a DHS official, reported that DHS canceled the contracts largely because the number of detainees had declined at the Bristol County and Georgia facilities. BCSO holds seven detainees out of almost 200 beds, while the Irwin facility has about 1,000 beds and holds 114 detainees, the Post reported. BCSO had held almost 150 detainees before Lawyers for Civil Rights filed its lawsuit in March of 2020.

According to DHS, the alleged abuse played a role in the decision to pull the plug on the contract.

Mayorkas, in a memo to ICE obtained by the Post, said his “foundational principle” is, “we will not tolerate the mistreatment of individuals in civil immigration detention or substandard conditions of detention.”

Mayorkas said the Bristol County facility “is of minimal operational significance to the agency” and argued there is “ample evidence that the Detention Center’s treatment of detained individuals and the conditions of detention are unacceptable.”

“We have an obligation to make lasting improvements to our civil immigration detention system,” he added in a statement. “This marks an important first step to realizing that goal. DHS detention facilities and the treatment of individuals in those facilities will be held to our health and safety standards. Where we discover they fall short, we will continue to take action as we are doing today.”

Healey, whose office had recommended a series of overhauls, including that ICE cancel its contract with BCSO, applauded the move.

“We commend DHS for ending its partnership with the Bristol County Sheriff’s Office, which has a long history of abuse and neglect of immigration detainees,” she said in a statement. “Our extensive investigation and advocacy have made it clear that the Sheriff’s Office is not willing to take any steps to protect the rights and safety of detainees, and that ICE must sever ties with BSCO. This decision under the Biden Administration ensures that the civil rights of immigrants are protected and not violated in a callous disregard for human life and dignity.”

Advocates celebrated the administration’s decision as a win for the detainees and immigrant rights at large.

“Sheriff Hodgson has inflicted grievous harm on vulnerable immigrants in his custody for years, and we enthusiastically applaud the Biden Administration’s decision to put an immediate end to the abuse,” he said.

“The end of ICE contracts at Irwin and Bristol are an important win for the immigrant rights movement and the growing demand to shut down detention centers nationwide,” she said. “Immigrant lives are in jeopardy anytime they are in ICE custody, and we will continue to press the Biden administration to cut detention contracts, release people from ICE custody, and shut down detention centers for good. Simply put, everyone should be able to navigate their immigration case at home and in community — not behind bars in immigration detention.”

The Massachusetts Immigrant and Refugee Advocacy Coalition called the canceled contracts a “vital and necessary step to end the unjust detention of immigrants.”

“Our coalition has long opposed the entanglement of local police with federal immigration enforcement actions and detentions and the 287(g) program nationally,” Daniel Pereira, MIRA Coalition spokesperson, said in a statement. ”These agreements represent a wasteful use of public funds, deter immigrant victims and witnesses from reporting crimes, and often lead to racial profiling.“

MIRA calls on lawmakers and Gov. Charlie Baker to pass the Safe Communities Act to make Massachusetts a sanctuary state — ending state and local law enforcement’s involvement in deportations or jailing immigration detainees, and prohibiting law enforcement and courts from asking about immigration status. Passage of the Act Relative to Enforcing Federal Law would also help “protect everyone’s basic rights, ensure access to justice in our courts, and restore the safety and dignity of all our communities,” Pereira said.

13 Investigates: How criminals are using mobile banking to steal from your bank account

Fri May 21 , 2021
During the pandemic, millions of people switched to mobile banking. It’s incredibly convenient, but criminals are using it too to drain bank accounts. INDIANAPOLIS — Robb Fine and Harold Wilson have never met, but they have a lot in common. Both men own small businesses in Indianapolis. Both work long […] 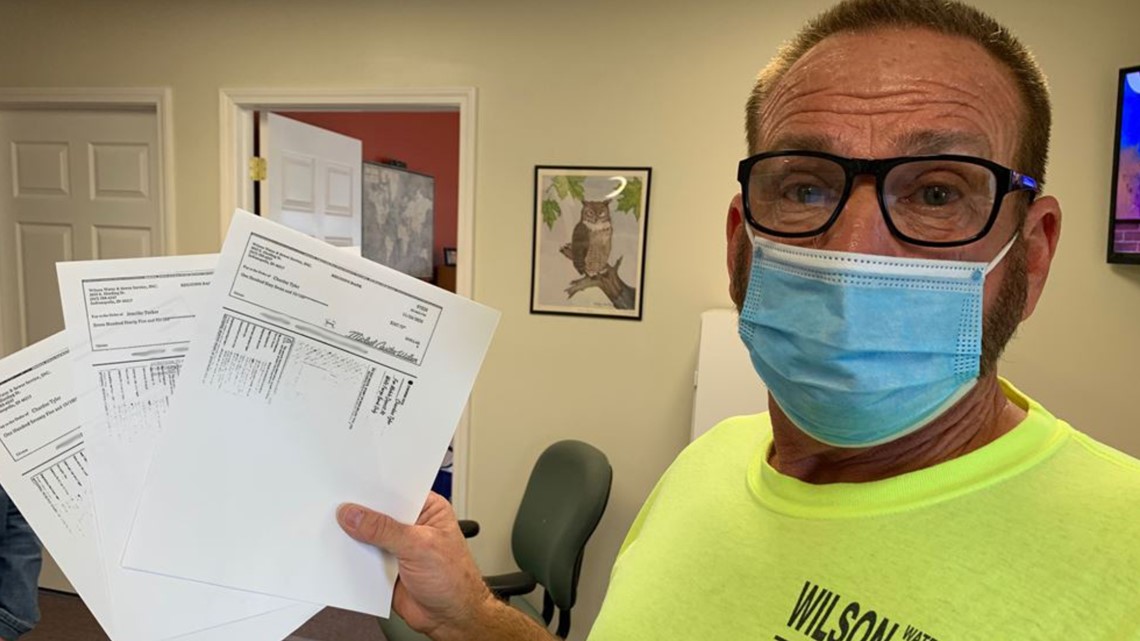