Joyce Terry has been a resident of Imlay City for 40 years and wanted to show her support for the police department with a handmade sign. “We love our cops,” she said. “We have a great rapport with them.” Photos by Nicholas Pugliese

IMLAY CITY — When organizers of Thursday’s public forum to discuss the future of the Imlay City Police Dept. said the event would happen rain or shine, they were hoping for shine.

They didn’t get it. Instead, approximately 200 residents filled the Walker Barn at the Eastern Michigan State Fairgrounds to listen to presentations and voice their questions and concerns regarding the proposal to disband the Imlay City Police Dept. and contract law enforcement services with the Lapeer County Sheriff’s Office.

It’s currently being debated among residents and city officials on what direction to take regarding the policing of the 2.5 square-mile city and several questions were swirling leading up to the forum, including what would happen to the city’s employed eight officers. 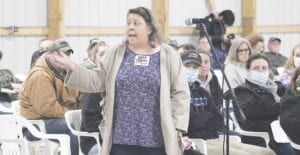 Several residents, including Theresa Sieczynski, raised questions and concerns regarding the proposal to disband the Imlay City Police Dept. and instead contract law enforcement services with the Lapeer County Sheriff’s Office.

First to speak was Grant, who was asked to present an objective view of the issue as a police chief who had been in the center of similar discussions before. He said he had “no set feelings” on the route needed to be taken in Imlay City, but the Imlay City Commission would “have to do what’s right” for the residents. “It’s a very emotional topic, but you have to look at the full picture of what’s going on,” he said.

That includes changes to the profession and practice of law enforcement on a national level, he said, that has only just begun to affect local municipalities, and might come with additional costs.

Following Grant was Stowers, an attorney from law firm Plunkett Cooney, an independent firm tasked with ensuring that a contract with the Lapeer County Sheriff’s Office (LCSO) would be allowed under the current Imlay City charter. Stowers told the gathered crowd that under the language of the charter, as well as wider state statutes, it’s legal to do so. Municipalities like Imlay City are also required by law to maintain a police force, a condition that would be satisfied should the Imlay City Commission choose to contract with the LCSO.

It’s been a hot topic of discussion among residents and officials in Imlay City, spurred on in part by social media discourse. Lapeer County Sheriff Scott McKenna spoke to address some of the questions raised via social media as well as “share facts” on how exactly an arrangement between the city and the county would work in practice. “This is one of the harder things I’ve had to do in my 27-year career,” he said. “I’m vested in this county and I’m not here to argue or yell — when this first came out I was asked different things, why I’m not speaking out on it — this is Imlay City and ultimately it’s the Commission’s direction.” 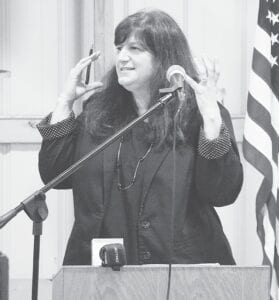 Imlay City Mayor Joi Kempf called the public forum to order before yielding the floor to a number of informational presentations. Photos by Nicholas Pugliese

McKenna was first approached by city leadership to assist in the hiring of a new police chief to replace the outgoing current Chief Scott Pike, who as of Friday (April 30) was officially retired. “It was very simple,” he said.

McKenna said it’s a “different world” for law enforcement in regards to finances. “This (idea to contract services) isn’t new, this is happening all over the country right now,” he said. “It isn’t a new concept, and ultimately it comes down to two things — coverage and finance.” Today, the LCSO fulfills approximately 21 contracts with 12 municipalities in Lapeer County.

Imlay City budgeted $400,000 more in property tax revenues than it will receive, and the city’s commission is currently working to overcome that deficit — a shift to contracting law enforcement services with LCSO would provide anticipated savings of $400,000 to $500,000 yearly, or a 10-year savings of $5 million. That number in savings would include salaries for seven officers, one detective sergeant and once clerical position. If the city chooses to continue to spend the current ICPD budget of $1.3 million in a contract with LCSO, the city could increase its officer coverage to nine deputies, one detective, one sergeant as well as office personnel.

McKenna said any discussion of the plan is still in early stages and “nothing is set in stone” regarding the finer details. “Some things I can’t answer because we haven’t gotten to it yet,” he said.

One issue garnering significant discussion is the fate of the current officers employed by the ICPD. Kempf said she plans to discuss the ramifications of the contract individually with each officer in the near future and that in a general sense, the city is still in “the discussion state” regarding the ICPD officers. Under the proposed plan, if ICPD officers choose to remain in the municipality, they will be merged into the LCSO as deputies and their pensions will remain intact with the Municipal Employees Retirement System (MERS). All current officers could, upon the city’s request, be assigned to the Imlay City Division that would be housed in the current ICPD office.

McKenna said should the contract be pursued, Imlay City would see one-to-two patrol cars at all times in the city as well as a detective in the city, counting as an additional car during active shifts. He also stressed that the ICPD’s school resource officer “is the most important” law enforcement position “in Imlay City, or any city,” and that wouldn’t change. McKenna said he was told that commenters on social media alleged that the proposed contract would not include an SRO. “I don’t even have words for that,” he said.

If a contract were to be signed, it would be structured differently than any of the current contracts with other municipalities due to Imlay City’s status as a city, as opposed to a village or township. A significant difference would be visibility, said McKenna. “You need visibility on M-53, that’s not even an option,” he said. “It’s the second-busiest throughway in Lapeer County and the busiest for trucks.”

Ultimately, said McKenna, it’s up to the Imlay City Commission and the residents to decide what kind of service they want. “It’s not my decision, that’s yours,” he said.

Sun May 2 , 2021
This post is part of Outward, Slate’s home for coverage of LGBTQ life, thought, and culture. Read more here. Anti-trans laws and bills are flooding state legislatures throughout the country. Some, like Arkansas’, make it a crime for doctors to treat trans kids with the gender-affirming medical care they need. […]