STANTON — An accounting adviser is preparing a letter of engagement for the Montcalm County Board of Commissioners to sign before he takes a deep dive into the county’s finances.

Stephen Blann, an accountant with Rehman, explains his process for taking a close look at Montcalm County’s budget at the request of commissioners — with a focus on the sheriff’s budget — as Sheriff Mike Williams listens in back. — DN Photo | Elisabeth Waldon

After meeting with Stephan Blann of Rehmann for 45 minutes on Feb. 22, commissioners agreed — without taking an official vote — to have Blann prepare contract terms for their consideration at their next Committee-of-the-Whole meeting, which is scheduled for 4 p.m. on Monday at the Montcalm County Administrative Building in Stanton.

Commissioners want Blann to give them guidance about how much money their general fund should hold; whether the sheriff should first use his voter-approved law enforcement millage to fill his own budget requests before asking commissioners for general fund dollars; and how much of the county’s delinquent tax revolving fund commissioners can use to help fund county services.

Voters approved a countywide sheriff’s law enforcement millage in March 2020. The millage will generate nearly $2 million in its first year with the goal of restoring 14 full-time deputies to the sheriff’s office, and thus restoring 24/7 road patrol, a service Montcalm County has been without since 2012.

Since that time, commissioners and Sheriff Mike Williams have argued about whether Williams should first use the law enforcement millage to fund his budget requests before coming to commissioners to ask for general fund dollars.

“It seems like we have butted heads, if you will, about spending, particularly in the sheriff’s department because it’s the biggest budget,” Board of Commissioners Chairman Patrick Q. Carr told Blann during the Feb. 22 meeting. “We thought we shouldn’t be banking special millage dollars and that those dollars ought to get spent first. Quite honestly, we can’t continue to fund the sheriff’s office at the level we’re currently doing out of the general fund. The sheriff … believes that we have more money to spend on programming and things throughout the county than we do. I just thought it would be helpful to get advice from an expert.

“Would it be fair to say that we would spend those millage dollars first before we ponied up general fund monies?” Carr asked Blann. “Say we put on seven of the 14 deputies that we had a goal for (the sheriff has currently hired five new deputies using the millage money), therefore we’re going to use half of that millage money and we’re going to put the other half in fund balance and have it available to use toward those sort of things next year?” 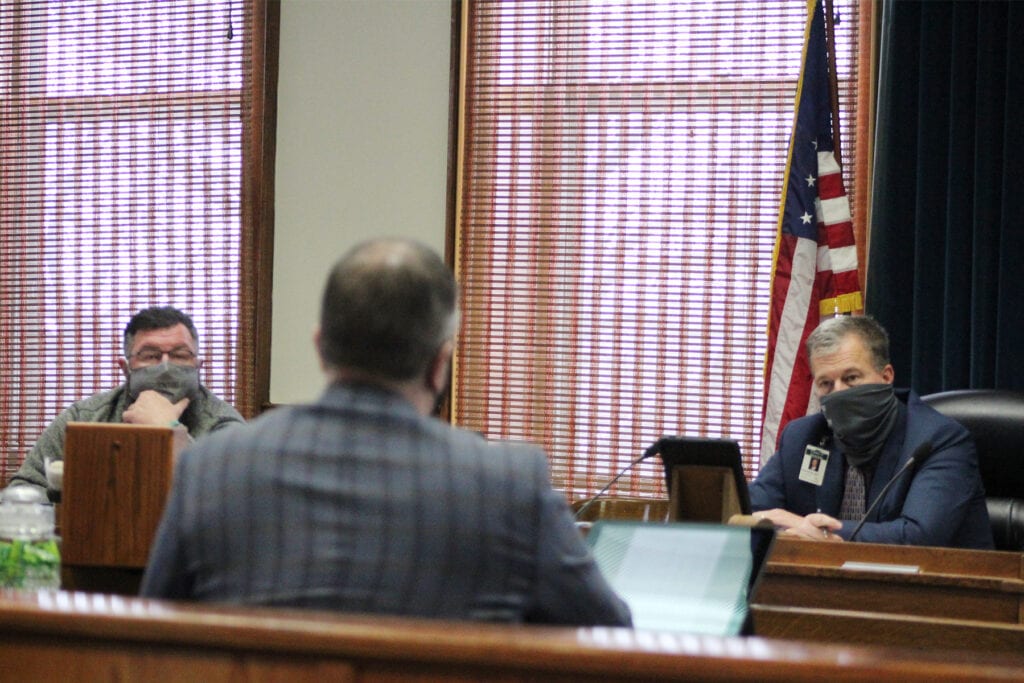 Montcalm County commissioners Adam Petersen, at left, and Patrick Q. Carr, at right, listen as accountant Stephen Blann of Rehman explains his process for taking a close look at the county’s budget at the request of commissioners. — DN Photo | Elisabeth Waldon

“That is absolutely a standard practice in government,” Blann responded. “When both restricted and unrestricted monies are available for use, it is the government’s policy to use restricted first and then unrestricted resources as they’re needed — 99% of government audits are going to say that. We almost always spend the most restricted money first.

“Now we do have to be really clear what the restriction is,” Blann added. “Was there something specific in the millage language that talked about how those millage funds were going to be used, such as staffing or equipment?”

Montcalm County’s law enforcement millage language did not specifically name the Sheriff’s Office, only “law enforcement” and “public safety;” however, Williams specifically promoted the millage to voters as one which would eventually restore 14 full-time deputies to the sheriff’s office.

Commissioners also want guidance in how much of the delinquent tax revolving fund they can use to fund county services. That fund is maintained by Treasurer JoAnne Vukin.

“I always thought it would be nice to have a number that allows JoAnne to do the work she needs to do and settling with the locals, but when that number is reached, we can declare it reached and use the surplus,” Carr said. “It doesn’t do any good for that account to be a runaway train, it should be spent on county services.” 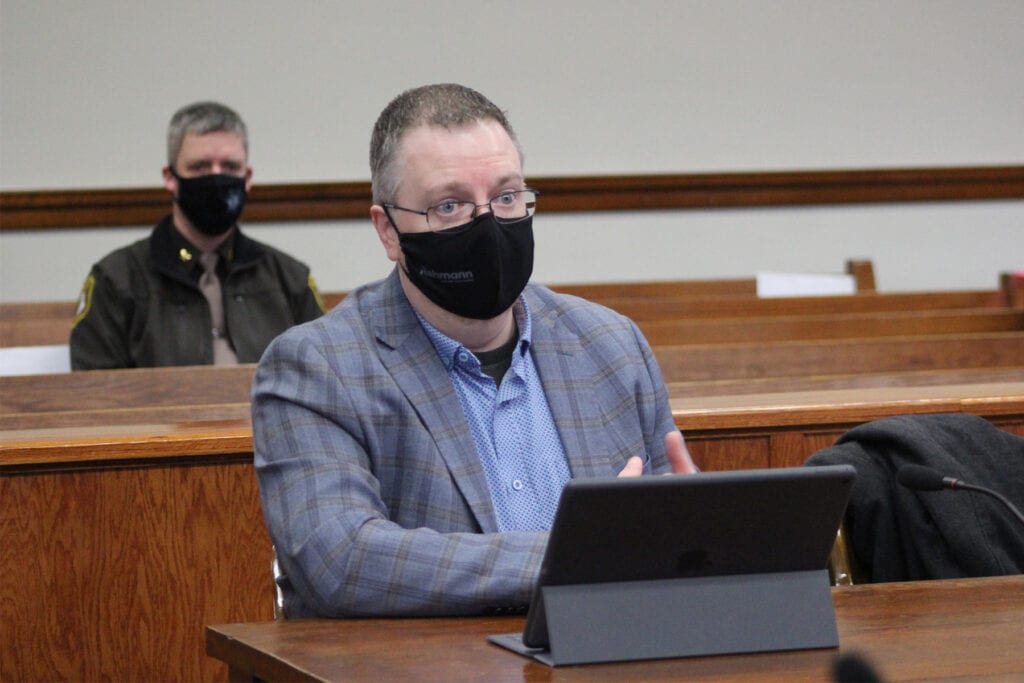 Stephen Blann, an accountant with Rehman, explains his process for taking a close look at Montcalm County’s budget at the request of commissioners — with a focus on the sheriff’s budget — as Undersheriff Andy Doezema listens in back. — DN Photo | Elisabeth Waldon

“One of the things that’s helped you is you do have a lot of cash in the delinquent tax revolving fund,” Blann noted. “You raised a great point where you said we ought to be able to use that for services. I agree, however, if you start plugging that into services, remember that will probably increase the amount of fund balance you will have to have in the general fund. That’s the tradeoff. There’s a lot of considerations there. There’s more than one right answer in terms of how you can do that.”

Blann agreed to draft a letter of engagement for commissioners to review. He also requested permission to speak with Williams and Montcalm County Controller-Administrator Brenda Taeter during his budget research.

“It’s been a long time since we’ve spent any money of any kind in any department, really,” Carr summarized. “Is there a way to sort of help prioritize or to know what that number is, is there a way industry-wide, to prioritize how it’s spent? Is there a way to kind of know percentage-wise what other counties do as far as how they allocate that whole pot of money to everybody else in the system?”

“To a certain degree, you have a wide-open slate in front of you,” Blann told Carr. “I know you’d love me to wave the magic wand and tell you ‘here’s the magic answer,’ but there isn’t one.”

“My biggest concern is to find out when the sheriff is here asking for a particular thing … let’s get to some kind of an understanding about this is how much money we’ve got, this is how much we can spend on everyone else,” Carr concluded.

Sat Mar 6 , 2021
Kanwalroop Singh had just finished presenting at the 2018 Students for Justice in Palestine conference at the University of California, Los Angeles when a student journalist asked her for an interview. Singh, a Sikh American who at the time was a law student at UCLA, agreed. She spoke to a […]