ISLAMABAD: Justice Qazi Faez Isa on Wednesday cautioned the fellow Supreme Court judges that it was not him alone but files were ready against each of them.

“I can honestly say that files are ready against each one of you and it could be the turn of any one of you against whom it could be said that he should be put before the firing squad,” Justice Isa said while referring to the June 2020 video clip of cleric Agha Iftikharudin Mirza who had threatened and hurled abuses at the former as well as the institution of judiciary.

In a passionate appeal to a 10-judge SC bench hearing a set of review petitions in the Justice Isa case, the petitioner judge said he did not want vindication of his stance or the ordeal he faced either from this court or from the public.

“It’s been two years and not figment of my imagination that I and my entire family have been defamed and maligned,” Justice Isa said, adding that he stood at the rostrum not to seek vengeance because of ‘their’ conduct but wanted that the scale of justice should be in a balanced position and not tilted in someone’s favour.

“Today I am the most despised man and today I am 62 years old and may go another three years and if resign I may get a pension or no pension if removed. I am not interested in this chair or a position but only have concerns about the dignity of this court and the dignity of the judges,” argued Justice Isa.

Naming Justice Muneeb Akhtar and Justice Yahya Afridi, who were sitting on the bench and destined to be elevated as chief justice, he said it was the moral authority of the judges which mattered.

If the moral authority of the judges erodes, then nothing will be left, Justice Isa said, adding that if he had committed any misconduct or was crook or any one of “you are crook, we should be removed but at least be heard first.”

Justice Isa also referred to certain mainstream and social media TV channels and Twitter accounts in which he was maligned as the apex court judge facing corruption reference. He also cited one of the anchors of Bol TV who in a programme stated that people had lost hope in the judiciary because there were two different standards, one for the rich and the other for the poor.

Referring to Iftikharudin Mirza, the petitioner judge regretted that the former had threatened the SC judge but was still living freely in Rawalpindi, and not on the mountains of Tora Bora (Afghanistan).

He accused the government of committing consistent contempt against the judges which was also demonstrable with their actions and then referred to President Arif Alvi who had in an interview at the Presidency enumerated that he had three options — either to sit over the reference, allow media trial of the judge or refer it to the Supreme Judicial Council (SJC) to be decided in accordance with the law.

“The president, the highest office is my head of the state, as well as of the PTI, PML-N and everybody, but he forgets that he is no more a PTI worker. Look, the president was saying that he had the option of blackmailing,” Justice Isa regretted, adding that he and his family members had been arraigned by everyone of this government.

At this, Justice Umar Ata Bandial, who was heading the bench, intervened to observe that everybody had their own way of interpreting the statements and said the president had never initiated media trial which started on its own.

When Justice Bandial reminded that “we have been sitting since March 1 and still we are discussing live streaming instead of the main review petitions”, Justice Isa said he apologised for the reference which was filed against him.

Justice Bandial observed that the petitioner judge should not be so sarcastic and also not be so negative in his approach.

Justice Isa argued that he was only speaking the truth and if he uttered a single lie his petitions should be dismissed.

“We are digressing from the purpose of the hearing and have gone towards something else. You are not here to judge what they judge or their intentions, so please carry on and argue,” Justice Bandial observed.

Earlier, Additional Attorney General (AAG) Chaudhry Aamir Rehman, while highlighting the downside of live streaming, contended that it could result in lowering the dignity and decorum of the court. He said a reasonable expertise was needed to understand the court proceedings, which were highly technical where legal jargons were used by the lawyers and the judges frequently.

“And during such proceedings, the judges ask questions and give observations only to fetch response for better understanding,” the AAG said, adding that such questions might cause a viewer to get confused.

Moved by senior counsel Hamid Khan and Munir Ahmad Kakar, the petition requested for constitution of a larger bench, which also includes Justice Maqbool Baqar, to hear and set aside the directive of the majority judgement against Justice Isa.

On Feb 11, a five-judge SC bench headed by Chief Justice Gulzar Ahmed had issued an order requiring Justice Isa not to hear matters involving Imran Khan since the judge had already filed a petition against the prime minister in his personal capacity.

Britain to slow vaccine rollout due to supply crunch in India, testing of big batch

Thu Mar 18 , 2021
LONDON (Reuters) – Britain will have to slow its COVID-19 vaccine rollout next month due to a supply crunch caused by a delay in a shipment of millions of AstraZeneca shots from India and the need to test the stability of an additional 1.7 million doses. Supply constraints are the […] 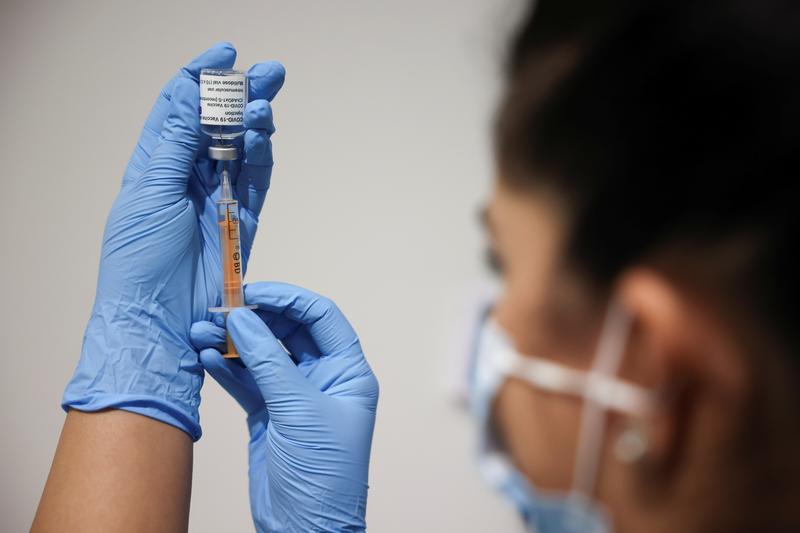