Four Manatee County commissioners are subjects of an investigation by the Florida Department of Law Enforcement into whether they broke Florida’s public record law leading up to their first attempt to fire former county administrator Cheri Coryea.

Some commissioners have already been questioned as part of the FDLE’s “fact-finding” of possible Sunshine Law violations. They were asked about private communications they may have been had among each other ahead of a Nov. 19 vote that notified Coryea of their intent to fire her.

The move to fire Coryea was rescinded, after one of the commissioners, George Kruse, changed his mind, but it was reinstated after Kruse again reversed himself. Coryea and the county agreed to separation agreement on Feb. 23, and she no longer works for the county.

The surprise move by the newly-elected commissioners James Satcher, Kevin Van Ostenbridge and Kruse, along with Commissioner Vanessa Baugh, immediately raised suspicions and concerns. Before voting against the motion, fellow commissioners accused the majority of setting up the vote in advance.

Michael Barfield, a Sarasota-based paralegal, filed a public records request the next day, seeking communications between the four commissioners. Barfield later filed a lawsuit, first against Satcher that he later expanded to include Baugh and Van Ostenbridge for not fully complying with his requests.

In December, Barfield also sent a complaint to State Attorney Ed Brodsky regarding the potential Sunshine Law violations. Barfield said he was told by Brodsky that he would be sending the complaint to an FDLE agent to investigate the matter, assuring him that the agent would immediately contact him.

An almost completely redacted document obtained by the Bradenton Herald in response to a public records request from the State Attorney’s Office shows that Brodsky forwarded the 75-page complaint to FDLE in a Dec. 14 email.

FDLE agents and spokespeople have declined to provide a comment to the Bradenton Herald about the investigation. Brodsky has not returned calls for comment.

“They’re in the fact-finding interview part of an investigation,” said Commissioner Carol Whitmore, who spoke with a pair of FDLE special agents on Jan. 25.

According to calendar appointments obtained by the Bradenton Herald, FDLE agents met with Commissioner Misty Servia and Whitmore on that day. During Thursday’s commission meeting, Servia confirmed that she had been questioned by the FDLE.

The FDHE also has questioned Barfield. The line of questioning has centered around texts and phone calls that commissioners made between Nov. 3 and Nov. 19.

During that time, a public records request revealed a series of phone calls and text messages between four commissioners who voted to approve a motion sending 15 days’ notice to Coryea to notify her of a discussion that could result in terminating her employment with the county.

Copies of the phone records and text conversations showed a text sent around 6:45 a.m. on Nov. 19, in which Kruse texted Satcher with instructions to “ignore our call the other night. Stick to the original.” The vote to proceed with terminating Coryea’s contract came just hours later.

On Feb. 18, three months after the meeting that sparked the controversy, Satcher, Van Ostenbridge, Baugh and Kruse were each served with subpoenas by FDLE special agent Brian Kitchner, ahead of that day’s commission meeting.

Baugh — who moments later publicly apologize for her role in creating a VIP list of residents to receive a COVID-19 vaccine at an exclusive event in Lakewood Ranch she helped to organize — dropped her subpoena into the lap of the county’s attorney. Kruse grimaced after receiving his subpoena.

The next day, Kruse declined to comment on the investigation.

“Right now, I’m not going to let noise distract me. I’m trying to move Manatee County forward,” he said. “That’s where my attention is — not on this. This is not where I think my attention should be.”

Rob Robinson, an attorney representing Commissioner Satcher, confirmed to the Bradenton Herald that the FDLE served Satcher with a subpoena. A few hours later, however, a special agent reached out to Robinson to let him know that subpoena was being rescinded.

“I do understand that Commissioner Satcher was served with a subpoena,” Robinson said in an interview with the Bradenton Herald. “Late in the day, I received a voicemail from Special Agent Eric Kuusela. I spoke to him directly and Agent Kuusela told me that they were rescinding the subpoena for Satcher.”

Robinson said his conversation with Kuusela did not mention the three other commissioners who had been served. Kuusela also did not explain why the subpoena had been rescinded.

In an email obtained by the Bradenton Herald, Kuusela gave official confirmation to Satcher that his client’s subpoena had been rescinded.

Van Ostenbridge to be deposed in lawsuit

The FDLE investigation was discussed on Friday during a court hearing involving Van Ostenbridge and the still-pending lawsuit filed by Barfield.

Van Ostenbridge’s attorney attempted to stop Barfield from deposing Van Ostenbridge, citing the commissioner’s intention to invoke his Fifth Amendment right against self-incrimination because of the FDLE criminal investigation. He also claimed that he has already surrendered all the documents responsive to Barfield’s request.

“Given these issues, it follows that any deposition of Van Ostenbridge on these issues would be fruitless. Plantiff’s insistence at proceeding with the deposition, over counsel’s objection, is merely further indicative of his intention to annoy or harass Van Ostenbridge,” attorney Morgan Bentley wrote.

In his written response filed in court records, Barfield stated there was “a factual dispute about whether Van Ostenbridge has produced all records. Moreover, a blanket assertion of Fifth Amendment rights is not permitted under Florida law.”

Judge Charles Sniffen denied Van Ostenbridge’s motion after hearing from both attorneys, but said he would make himself available on short notice should there be an issue during a deposition scheduled for March 12.

Bentley had argued before the judge that he feared that Barfield’s questioning may go into other issues outside the scope of the lawsuit, but he admitted to speaking with Barfield days ago and agreeing “on what the ground rules are going to be.”

“My questions are going to be focused on the production of records by his client to the extent that there were conversations between one or more commissioners, and there were,” Barfield told the judge. “I think I am entitled to any records that were generated in that context, so I don’t think that is off limits.”

Barfield assured the judge his focus was not on possible Sunshine Law violations.

“I am focusing on getting all of the records that are responsive to the request, that Mr. Bentley’s client has or had custody of. He was the exclusive custodian of the records sought here,” he said.

Both attorneys also already resolved the other related issue, they told the judge, and Van Ostenbridge will not be invoking his Fifth Amenment right and refuse to answer all questions. But Barfield said that he would bring the matter back before the court if Van Ostenbridge “invokes to specific questions.”

Jessica De Leon has been covering crime, courts and law enforcement for the Bradenton Herald since 2013. She has won numerous awards for her coverage including the Florida Press Club’s Lucy Morgan Award for In-Depth Reporting in 2016 for her coverage into the death of 11-year-old Janiya Thomas.

Ryan Callihan is the Bradenton Herald’s County Reporter, covering local government and politics. On the weekends, he also covers breaking news. Ryan is a graduate of USF St. Petersburg.
Support my work with a digital subscription
Next Post 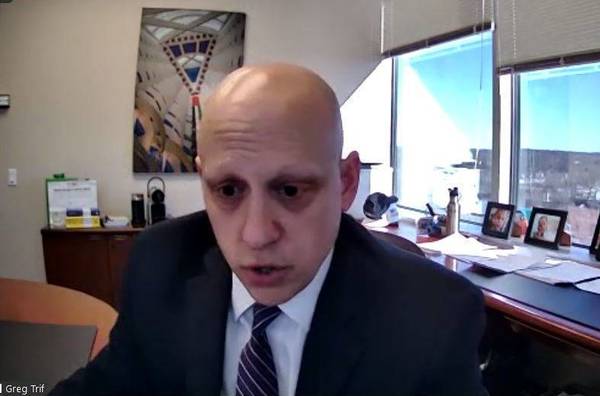