At a rally for President Donald Trump last month on the steps of the Vermont Statehouse, a 15-year-old girl approached the crowd, yelling and playing loud music on a speaker. Dozens of maskless Trump supporters surrounded her, and the incident quickly devolved into a physical altercation during which the girl spat on them and was knocked to the ground.

Now, after a monthlong investigation by the Montpelier Police Department, authorities have said both parties share equal responsibility for the incident. Washington County State’s Attorney Rory Thibault has recommended that no criminal charges be brought and that the two parties work out their differences through a restorative justice program.

The girl and her parents, however, say that outcome is unacceptable — and they want the case to go to court. (The family asked not to be identified, given the girl’s age and fear of harassment.)

A video of the incident shows the protesters swarming the girl as she approaches the Statehouse rally on Dec. 4. The protesters yell, “go home, you’re not from here,” and “get her.” Much of the altercation is obscured in the footage by American flags and Trump campaign flags carried by his supporters. After a few seconds, a man with a megaphone tells the group to “leave her alone” and she walks off, rejoining several other young people.

“These thugs came into our peaceful TRUMP/PENCE event at the VT Capitol with a music boom box playing,” he wrote. “They tore down some Trump signs and flags. One female spat on an elderly VT patriot. Our patriots kicked them, literally showed them the door.”

One witness to the incident who asked not to be identified for fear of professional consequences was on her lunch break when the fight broke out. She said she watched it through the window of a nearby building.

“I noticed some tense body language and gesticulating and, all of a sudden, this huge crowd of angry adults just, like, descended on the kids,” she said. “It was like a mad rush of action. I saw the young girl shoved, then watched the other kids being shoved as well. I could see that the kids were terrified. It was three on, like, a crowd of 50 or so.”

According to the girl, she and a few friends attended the rally with the intent of counterprotesting. She brought a speaker and was playing Cardi B.

“The Trump supporters come to our town, and me and my friends go down there and kind of yell at them cause we don’t like that they’re in our town,” she said. “They’re basically just throwing a hissy fit because their candidate lost the election. It’s just really stupid.”

She said the protesters, upset at the disturbance, surrounded her and grabbed her phone, trying to stop her from recording them, then attempted to physically prevent her from walking away. At that point, the girl said, she spat in one protester’s face and was shoved by one of the men. More shoving ensued, she said, until she was on the ground. There, she said, the protesters continued to kick her.

“There were, like, 40 people, and they were all men, all circled around me,” the girl said.

“And they were old — too old to be pushing little girls around,” her mother added.

‘Responsibility on both sides’

Montpelier Police Chief Brian Peete said the altercation resulted from “inappropriate behavior” by both the protesters and the teenagers. He said both sides needed to be held accountable.

“There was enough irresponsible behavior from everyone involved in that scene,” Peete said.

Based on interviews with participants and witnesses, Thibault concluded that the girl spat at the protesters first, but the protesters initiated the pushing and shoving. According to the girl, however, she spat only after she found herself surrounded by the protesters, unable to walk away.

The mother said she suspected police were sympathetic to the protesters’ cause — and that authorities now just want the case to go away. “The police could at least put out some kind of statement: ‘We don’t condone Trump supporters attacking children’ or something,” she said.

Though Thibault referred the case to restorative justice, he said “one or two” people on both sides could have been charged with misdemeanors. He added that any charges stemming from the incident would fall under disorderly conduct — related either to violent, threatening or tumultuous behavior, or to disturbing a lawful assembly.

He said legally it does not matter that one of the parties was a teenager.

“Irrespective of age, there is a certain expectation of decorum and civility that goes along with engaging in the political process to include demonstration and protest,” the state’s attorney said.

Thibault typically recommends that such cases go to restorative justice, he said. And following last week’s violent protests at the U.S. Capitol, he added, it’s all the more important to seek peaceful resolutions.

“I think now more than ever is the time to focus on the facts and to emphasize decency,” he said.

Directly after the attack, the girl said she called 911. It wasn’t until she hung up, she added, that she realized a number of officers were already on the scene — though none had stepped in when the conflict escalated. Peete confirmed that was the case.

“We try not to provoke the situation. We try not to agitate that situation,” the chief said. “And we want to make sure that everyone involved has the opportunity to exercise their rights of speech and protest and everything else to that effect. So we kind of stayed back on the side.”

The officer then called her back and said she needed to “teach [her] child to be more appropriate at counter-rallies,” according to the mother, adding that the Trump supporters could have reasonably thought her daughter was an adult.

“I don’t think anyone thinks that,” the mother said. “She had literally just turned 15.”

Peete took issue with that description of the conversation.

“From what I understand, the officers tried to engage and talk to the parents about what happened,” he said. “I believe the officers that were involved in this situation conducted themselves in a very proficient, very professional manner. And they did their due diligence; they respected everyone that was involved.”

Peete agrees with Thibault that it does not matter how old either party was. “In my humble opinion, there was provocation throughout,” he said.

According to the girl’s mom, the family had not previously had a negative experience with Montpelier police. “But here, they were present for these guys laying a hand on a 15-year-old, and all they did was call me to complain about my behavior,” she said.

“If anyone were to insinuate that the Montpelier Police Department was not diligent or professional in how it handled this situation, I’m [diametrically] opposed to that. That did not happen,” he said. “I have faith in our officers.”

Restorative justice typically involves bringing parties together to take responsibility for their respective actions. But according to the girl’s family, that approach is not appropriate in this instance.

“They would want a minor to go and defend herself to these guys?” her father said. “It seems like a really weird spot to put a 15-year-old in.”

He said the family plans to decline that option, which could result in Thibault bringing charges — against both sides. The father said it was important for the adults involved to be held responsible for their actions.

“The video of [the altercation] alone proves they’re guilty of assault, and anything that came after that assault one would assume was self-defense,” he said. “My daughter totally owned up to her part in it. She’s more than willing to fend for herself in front of a judge.”

The girl’s mother said that in the last month she’s only heard from police after she has initiated contact. The cops never asked her daughter to provide a statement about the event, she said. In her view, resolving the situation quietly through mediation would only play into the department’s hands.

“This same thing could happen again next week,” the mother said. “I just want the story told so people are aware that even in our little town of Montpelier, a kid was attacked by Trump supporters and absolutely nothing happened.”

Sun Jan 17 , 2021
The alleged stun gun-carrying Capitol Hill rioter photographed with his boot up on Nancy Pelosi’s desk has been ordered to remain in jail and brought immediately to Washington, DC, so his case can proceed, according to a new report. Arkansas-native Richard Barnett, 60, was initially scheduled to be sprung Saturday on $5,000 […] 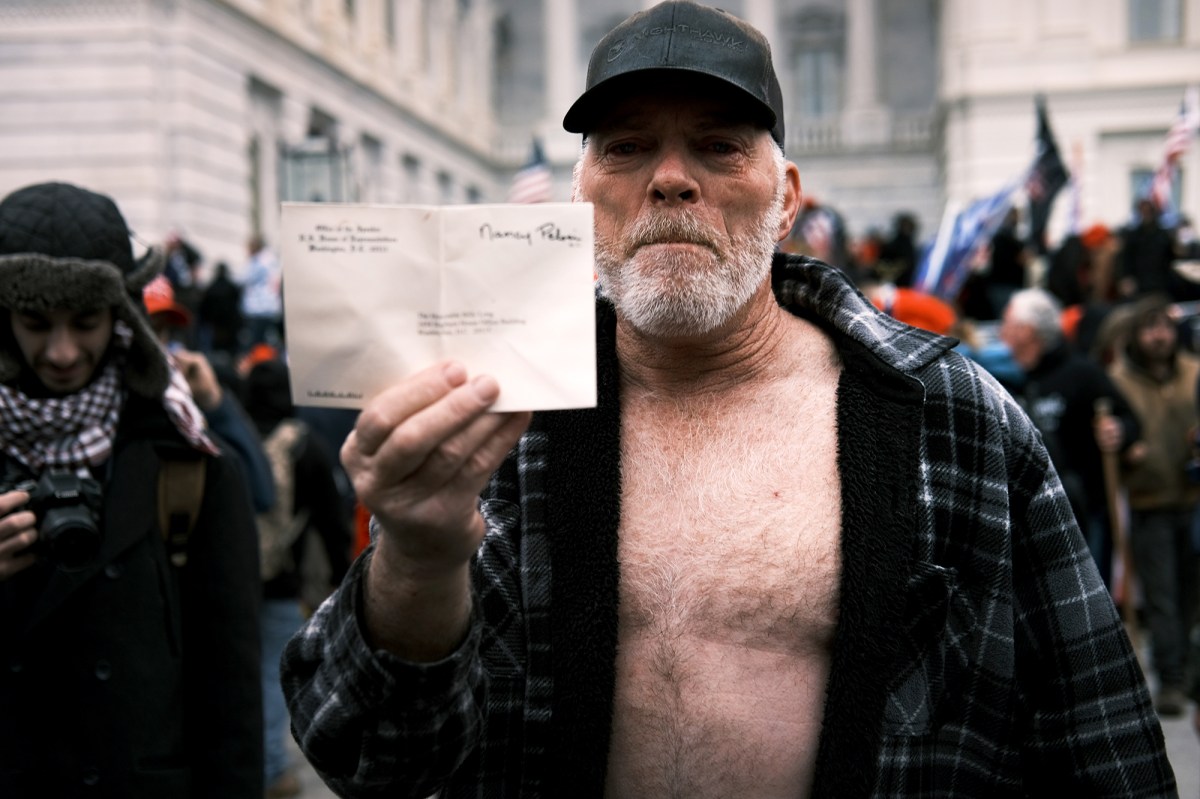